Had a poke at saving images tonight. I don't know where the damn day went but I only started looking at doing some hacking at 10pm tonight.

To start with I thought i'd skip any esoteric floating point formats or bothering with layers and just stick with the standard formats and trying to fit the images to suit. So about the best format is PNG with 16 bits per channel. It's a bit of a pigs breakfast but basically it scans the image to find the highest depth/format image in the layer stack and then starts trying to find an image writer for that format and just keeps dropping down to lower depth resolution until one works. e.g. it tries floats, then shorts, then bytes.

Well, things are a bit mixed ... to say the least. 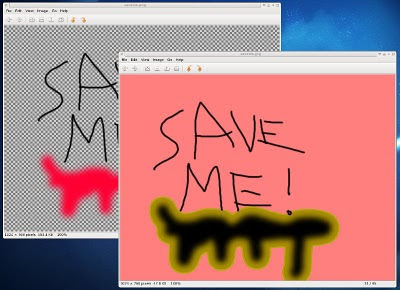 PNG isn't too bad - it's saving as 16 bit per channel too - but JPEG does weird things. Actually I was surprised it even saved a 4 channel image - I expected it to fail. What's strange is that Java loads this weird 4 channel JPG just fine as an RGBA image but nothing else does. Java's in the wrong here I'm pretty sure?

Unfortunately the image writer interface doesn't let you find out what type of individual things the image format supports and all you can do is query if it supports writing a given complete format. I guess i'll just have to hardcode it for every format I will support - I suppose I need to anyway to handle the meta-data properly and stuff like compression options. The standard JRE doesn't support much anyway and besides I don't need to either. I suppose i'll use OpenRaster as the 'native' format, although TBH anything with XML and interoperability mentioned together just sounds like a nightmare.

Hmm, then there's all the state and metadata to muck about with from inside the app. Oh wont that be fun.

Storing everything as RGBA also complicates matters ... although I can cheat a bit and put options on the per-format requester for target bit depth & channels saved.