GSOC 2010 is coming to an end and the final assessments have been made, so it's about time I posted an update on the result and my experiences.

XBMC had been compiled to run on the BeagleBoard but wasn't really practical for use. The menu's and video ran poorly at under 10fps even for low-resolution video and in general it wasn't usable.

Part of the reason is because the rendering system is written as a game loop - everything is drawn every frame and it relies on relatively powerful video hardware to ensure it runs at a reasonable rate.

To speed up the menu's and video playback to a point it might be usable, or at least demonstrate it could be possible.

The initial aim was to try to reduce load on the graphics rendering subsystem by reducing the amount of work it was given. Ideally working towards an event driven widget system but at least not drawing things that haven't changed from frame to frame. Although this was much of the initial proposal and most of the time spent, the resultant improvements were only modest. The menu's did speed up some but the full-screen video wasn't markedly changed since usually there are no graphics to draw at the same time anyway.

Two other suggestions became key to improving the performance. One was to use the video overlay hardware in the beagleboard to perform the video to rgb conversion and image scaling. The other was to come up with a more modest theme which didn't tax the system so much - reducing animations and large background images.

The good news first. You can now play small videos smoothly and navigating the menu's on their own is also responsive enough to be usable. Just on this alone the project was clearly a success - 11 weeks is really a very short amount of time to do anything much and certainly not enough time to debug someone else's software.

Whilst playing a video in the background the menu's still have some issues - things slow down quite badly and the video overlay (well, under-lay) doesn't work terribly well. I think the custom theme should help this though. 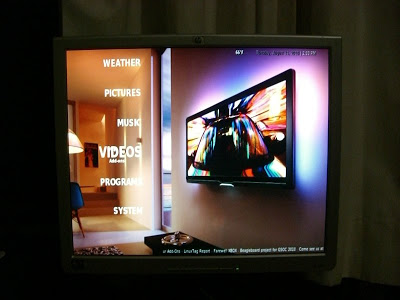 The main menu in the default theme.

Unfortunately I hit a pretty major bug when trying the custom theme made for GSOC, so I had to leave it with the (mostly) original theme. This appears to be some issue inside the deep lower-bowels of XBMC. 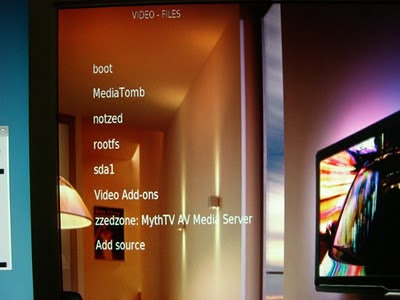 Although even the default theme had some major problems. The above is the video source menu - but it's only showing the text and you cannot see the mouse when it is stationary, and the keyboard does not highlight the current menu item.

Not being an XBMC user i'm not terribly familiar with the controls - which makes it a bit difficult to use when you can't see them much of the time. I seem to hit a lot of stability problems when trying to quit a video and try another one. And if things don't shutdown cleanly you can be left with a frame of video or a blank screen covering everything.

Playing at least a low-resolution video from local media is quite fine - there is no tearing, the scaling looks quite acceptable, and the video and audio generally keep pretty good sync. The above screenshot is whilst playing a 640x480 24 fps mpeg-1 video, and at least it's got enough headroom to keep the video playing.

Playing music seems to have an unusually high cpu usage - but still under 50%. And it plays quite well across the network from a mediatomb server I have.

So for comparison here is my favourite reliable video player mplayer's top results on the same video - so there's still obviously some way to go on the video pipeline front since they're both using ffmpeg for the decoding (afaict). Although mplayer tears noticeably so isn't terribly great either.

Also for comparison, mplayer is able to play 576p (720x576x25) recordings from a digital tuner (mpeg2) without dropping frames - and under 90% cpu utilisation. And I believe that is only using the CPU (and presumably Xvideo overlays). XBMC cannot keep up with this and doesn't degrade terribly gracefully (audio stutters, video remains black, the menu's become unresponsive).

Obviously there is still a lot of work to be done before it's practical as a media player. If the issues with the themes and some general stability problems were fixed it could at least be used in a limited way - e.g. as a remote player for a small screen or an analogue tv (and the lower resolution is a big help for performance of the front end). With more work it could certainly make it as an SD media player and a HD one (720p) for the Beagleboard XM (the next-gen one that was just released a few days ago). The DSP is also sitting idle too so the hardware is capable of quite a bit more.

From a very limited amount of profiling I did, it appears the XBMC codebase is littered with snippets of less than ideal code which eventually adds up. For example the background images are scaled using a simple double for loop and put/get pixel routines - which gets very slow as the resolution of the interface is scaled up (simple fix here is theme tweaking). The audio is being remixed when I believe it doesn't need to be since the audio bitrate is flexible, and so on and so forth.

Reports from Tobias suggest there are opportunities for tuning of the calls to the graphics library to improve performance. e.g. splitting up large textures into smaller segments and so on. Some of the GL library is still in software so ideally you'd avoid those code-paths. The XM board also has updated hardware which implements more of the API directly so has different tuning characteristics and just runs faster.

And from the way it runs I gather the media loop is still a bit too tightly coupled to front-end. Given that the video is being rendered on a separate surface to the menu's there's the potential for them to be completely de-coupled although apparently that isn't going to be easy.

XBMC is a very big piece of software that appears a muddled together from a lot of separate pieces tied together with python. Although a lot of the code seems pretty decent I wonder if it isn't straining a little under it's own weight, particularly on a machine with limited capabilities. And well, python ...

GSOC was I guess an 'interesting' experience. I think what made it most strange for me was it was for software of which I am not a maintainer (or even contributor or user). Not having intimate knowledge of the software and specific internal goals for it made it hard to judge the direction things should move in. Fortunately Tobias had a better idea of that than me, was good at finding things out on his own, and took directions well. And I know a thing or two about GUI programming, and a bit about video, so I still had some important tips to offer. I got side-tracked with work and other projects as well and the timezone difference (~10 hours) didn't help so I didn't really have as much time as I thought I might when I put my name down initially - but I don't think that had any effect on Tobias's progress and I made a point to keep up with the few mail conversations we had.

I also had a strange problem for which I still haven't identified the source of - all of a sudden the code just wouldn't run any more. Odd errors about pixel shaders not compiling and bogus messages in the log file. I tried recompiling multiple times, updating the os, upgrading the os - in the end changing to another spare board fixed it. I'm not convinced it's a hardware issue since everything else was working ok but haven't had the time to track it down.

The BeagleBoard/TI fellows were decent and quite helpful. Jason deserves special mention trying to manage this all for the first time and doing a pretty good job. Others helped chairing the IRC meetings when he was unavailable. Which can't have been that fun as nobody seemed terribly attentive at them.

The Google side of things wasn't exactly inspiring - not a great deal of direction on things such as grading (although again, a project one was more involved in would help), and an utterly dreadful piece of software they use to manage it. It was almost enough to want to give up before it even started but thankfully after using it constantly during that time, you only had to use it a couple more times after that. As a general mentor (not the boss-man) there wasn't really any direct interaction with Google anyway.

For students - make sure you're doing something you're actually interested in. And you really should have some free software experience under your belt already and ideally with the project in question. Experience with source control, email and IRC and remote development is pretty important. I can't imagine too many mentors would like me merely do it because I could and out of curiosity - they probably want a real outcome and hopefully a long-term contributor to their pet project. And make sure you really have the time to dedicate to it - university, family , or other personal commitments can very quickly eat into the limited amount of time you have available.

For mentors - choose wisely. From the sounds of it the beagleboard projects all went pretty well, and there was certainly a lot of deliberation over which projects to choose. Also, don't waste time on students who can't even be bothered to submit a full proposal to start with or who have ideas a little too crazy (Beagleboard seemed to get a lot of these - I think because it had a hardware/software component and only a few specifically targeted software projects). I'd personally avoid anyone who looks like they're just doing it for school, or the pittance of money on offer.

I'm kind of in two minds whether the whole thing itself is a terribly good idea. If you need such encouragement to discover the joy of hacking then maybe it isn't for you - most projects are looking for programmers all the time so it isn't hard to find something to play with. Although I guess they aren't always all terribly welcoming. Perhaps on the last point it has some merit since it forces organisations to get their shit together a bit wrt novice contributors although I imagine for many of them it isn't actually worth the effort.