Bit tired(er than the usual tired as hell that i always am), was a long week last week (a few really late nights). And I've got a deadline to meet Thursday so potentially this week as well although I feel i'm pretty on-top of things unless something unexpected turns up.

I manage to find a few hours over the weekend to hack on ImageZ again to start filling out some of the UI and basic guts. I'm still staying away from the gpu acceleration until I get a few more basic bits working.

I've implemented more of and hooked up some of the toolbox.A bunch of blend-modes taken from this page on photoshop blending maths. Although i've only done about half. I keep mucking about with the layer compositor and breaking things so they don't all work right now although since I did have them working at one point I presume it's the compositor's fault this time.

I've written a layer list including icons which update on another thread although I still haven't got it displaying transparent areas properly. Actually I haven't got them displaying properly in general - along the way of fixing the blending modes I broke it.

I even did some fugly `programmer designed' icons - you have to start somewhere. The coloured buttons are just an experiment and to make it a look a bit gaudy on purpose.

More than a passing resemblance to The Gimp I guess, but at this stage I don't have a lot of other ideas and it isn't terribly important. Although i'm starting to have a few, at least wrt keeping things simpler and trying to get rid of all those stacks of popups that riddle your screen or your every action. The hidden main menu i'm liking more and more too.

Behind the scenes I spent a lot of time trying to get the blending modes right - I just kept stuffing up up the maths since i'm doing pre-multiplied alpha. I redid the compositor a couple of times, first so I could clean up the way the tool layer works and make it more useful, and then to add the selection mask. And the last time I think i stuffed up the blending mechanics again so some of the modes don't work. It's one of those first-simple-thing-you-wrote things that turns into the hairy hoary crux of the whole application.

For each layer you can request a single temporary layer which becomes the tool layer. You draw to that, and the image code will automagically blend that temporary layer into the image as it composites, either as an application on the current layer (e.g. for a drawing tool) or as a replacement against the current layer (e.g. for filter operation). When the tool is done with it it then either gets automatically applied/merged to the layer or dropped, and the temporary layer is put back in a small cache and cleared. This way it doesn't have to allocate/clear a big image-sized layer every time you hit the mouse button, and you're unlikely to notice any delays it might add when you release the button. 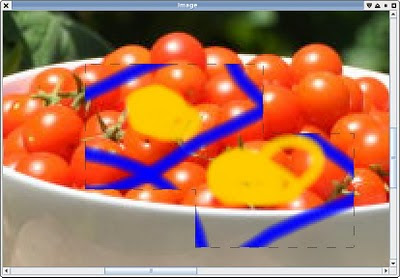 As can be seen above, the selection mask works, although I broke the code which does the feathering when I added the mask to the rendering pipeline (I changed it from being just big enough to matching the image size to simplify the compositing). A few more lines of code and i'll have all the various selection merging modes working (union, intersection, difference, etc) as well as all the polygonal shapes (ellipse, free-hand, etc). Select by colour/etc may be a bit trickier, at least in the drawing a box around it department (the mask is a mask is a mask is the same). I will probably resort to some sort of bitblit operation for that (i.e. threshold then xor a shifted version of the thresholded mask against itself).

I'm sick of this shithouse freezing weather, it's just so cold I don't want to leave the house. I really need to get out and do some exercise - put on a few kilos in the last few weeks because i've spent so much time sitting infront of a keyboard only exercising my brain.

Probably time for a break, although i just turned the TV on and it just reminded me why I've been doing so much hacking lately!