Had a bit of a break over the weekend and yesterday but back into it this evening.

I've sorted out the toolbox ideas enough to get something working. It's a little ... odd, I guess. The flow i envisaged isn't quite as clean as i'd hoped although I imagine it's something you could get used to fairly easily.

Basically F1 and F2 bring up the current Paint or Grab windows, or toggle a given one. If you switch between them the other is hidden so only one is ever visible. If they're visible when you do it the location sticks, otherwise it pops up under the mouse. Space hides whatever is visible or shows the last one hidden. Fairly straightforward at this point.

Now things get a bit weird. When you bring up a given window, the last tool you used on that window is automatically selected. I didn't do this at first and I kept popping up the paint box and expecting to be able to draw in the scratch pad so it seemed like an obvious solution. But i'm still not entirely happy with the flow when you switch for example between selection and drawing. Although perhaps accelerator keys for the tools themselves will simply make this issue go away. And if I do that then space should probably pop up the poxy of the currently selected tool.

Ahh well, things to try. I have at least killed the 'master toolbox' entirely now, so upon launch you're simply presented with an empty image window to start with from which you can 'new' or 'load' to make it un-empty. Well apart from a bug that seems to open a new window fairly often instead. I'm not tracking the windows yet so if you close all the windows it leaves the application lying around, but I guess that wont be terribly difficult to sort out.

I also had a quick look at sparse images. Basically the image is backed by an array of tiles and tiles are only created when you write to them. Otherwise they read as cleared pixels (or whatever else is handy I suppose). 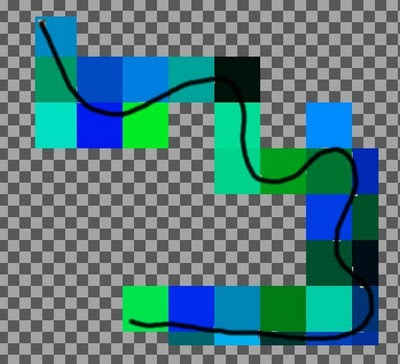 Showing the blocks created during the doodle sequence.

Pretty simple stuff - although because of the way the Java graphics system works the address arithmetic is a little messy. It accesses the data storage as a 1D array, so it has to go through a lot of excess arithmetic - flatten a 2d access into a 1d access, then unflatten the 1d access to calculate which tile it's in, and finally re-flatten the tile access itself.

For the bulk transfer functions I've tacked on for the compositor this isn't too bad since they access it via 2d coordinates anyway - apart from doing a whole row at once (once i've written it properly). Perhaps for Java2D I can write my own WritableRaster and/or SampleModel class to avoid some of these calculations and some of the indirection.

But what I have works (so far) and was pretty easy.

This could open up some interesting possibilities. For starters using it as the 'incremental tool layer' should help with interactive start-up/shut-down speed on big images - no longer does it need to clear or allocate potentially multi-megabyte arrays at any given point. And since most drawing tools only touch a bit of the image at a go it should (hopefully) be fast enough even without optimising. Then for certain file types something similar could be used to implement very very large images (although functions like 'zoom to fit' might be bad). The fact that it's abstracted into a pretty small bit of code that nothing else has to directly deal with is the nicest bit.

I was reading a bit about VIPS last night and that gave me plenty of ideas about handling very large images ... although perhaps for now I should stick to what I have rather than think about parallel pipeline tile based batch image processing. It does sound pretty interesting mind you.

I also had a bit of a look at fotoxx ... which has some quite nice filters and processing abilities. The UI is a little strange though (looks who's talking I guess) but what really takes the cake is the code - about 30KLOC of c inside 2 c++ source files. Somewhat impressive for a GUI driven multi-threaded application. Very light on memory but a few things were a bit clunky and I unfortunately got it to hang trying to flip through a few pages of 10Mb images.

Hmm, just about time for sleepy bobo's I think. I have the final evaluation for the GSOC I will probably do tomorrow (I should post again on that actually), and i've been sleeping a bit poorly lately - I get reasonable hours down but just wake up exhausted.