Had a day off yesterday and although I seemed to spend a lot of time hacking I didn't really get much done. I had a few possibly good thoughts though.

The layer changes I made a few days ago should almost make GPU layers fairly easy to do without having to rewrite everything ... almost. I added layer-specific damage tracking toward that end, but that's about as far as I got. Considering writing a SampleModel which can write directly to the OpenCL buffers (which go through the nio buffer types) which would let the tool layer sit mostly on the gpu too (although there are other options which might be easier), but that's as far as I got.

I've done undo a few times before for various applications and it's something I don't particularly like doing. I guess I should get over it since it isn't really that difficult.

I was contemplating a sort of fancy undo that recorded what you did as well as the data changed so as well as go backwards you could selectively 'turn off' or edit bits you've done and re-execute them and also using that as a basis of a macro recording system - e.g. being able to run the undo history on a different layer or image. But I think I might hold off on that/or just do that as well but separately from the undo mechanism and make undo simpler.

To implement undo you need to save the changed bits, and for redo you can either save the result bits or details of the operation performed. For most drawing operations this will really just mean that the result bits are also saved. As a first cut I will probably store an exclusive-or or subtracted image as the delta limited by the bounds of the change since that will let me go either way from whatever position i'm at in the undo history. It might be compressible too and I could compress lazily if that works out to be worth doing.

I think I can fit the delta generation into the composition routine that is used solely to apply tool writes to the target layer - that's one point where both the result and original are available transiently automatically without having to save the before image separately. Then again that's only in float form.

A thought I had whilst not being able to sleep early this morning. I don't really want to do a whole tile-based system ... but it might make sense for the tool layer and mask layer. One issue I have is that clearing/creating big layers for images simply takes a long time, but for the compositor it simplifies things greatly if any tool layers are the same size. With the get/setLine() interfaces I can easily hide the fact the backing store is a sparse set of tiles so at least the rest of the application doesn't need to know. The real issue is whether I can create a Java2D compatible image which dynamically allocates tiles as you write to them ... which I think should be possible by implementing a new SampleModel and DataBuffer. If I can get that sorted then this actually opens up a lot more possibilities such as supporting very very large images by virtualising the storage as well.

A couple of issues I have with The Gimp - it's hard to find the toolbox if you have a big screen, other shit running, or a couple of windows open, and it's difficult to work out what the tool options are going to look like without trying them. Opening up all the toolboxes just makes it worse and doesn't scale to low-resolution displays either.

Initially my idea was to have the whole toolbox show/hide right where the mouse is based on pressing the space bar. But then I thought it would have to be too big/cluttered to fit everything so I will probably use those keys that never get any wear and tear that every keyboard still has and were made just for this purpose - the function keys.

I can split the tools into logical groups such as painting, selection, affine transform and so forth so you don't have to put up with the clutter of the unconnected tools when you pop the one you're after up. They are not modal so you can still work on the rest of the image if you want a reference handy/space is too far to go, but only one can be shown at a given time. 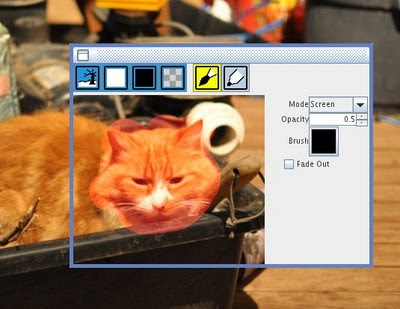 Has Cooper got the pox?

For the painting PoxyBox for example I want to have a scratch-pad area where you can actually try the tool options you've set before trying it on the image. Sure undo works for this but it's a bit clumsy. And as seen with the bluish buttons, you can take a snapshot of the image under the window to poke at, or background/foreground colour, transparent, or perhaps the current layer. Then you hit space or the function key and it goes away and leaves you to do what you were doing without filling the screen with clutter. Perhaps the function key can open up a specific one/change the current tool and space can just revisit the most recently selected. I should probably put the list of layers in there too. The scratchpad makes a mess of the design I created for connecting tools to an options setting widget but i'm sure I can sort that out somehow.

For the affine transform PoxyBox I will have all the details of the affine transform should you wish to enter the details numerically (somewhat like the 'numeric' function in Blender) - so it doesn't have to pop up another window just to show you this. The selection PoxyBox might have a preview of the feathering settings which I always find very hit and miss to judge.

The InternalFrame isn't really what I wanted to use, but I couldn't get normal panes to show up on the frame's LayeredPane so far, and it works for now. A separate top-level window may be the go anyway and it could practically be a bit bigger too. But then it might get confusing switching between drawing surfaces or finding a way to make it behave consistently with multiple pictures open.

(The name is in indeference[sic] to the IMHO not so awesome "Awesome Bar" from Firefox, and a little more obliquely to the fact that the idea reduces toolbox-pox and popup-pox).