I don't know why the default size of the Java file requester is so unusably small - perhaps it is some microsoft legacy, but it's really quite nice when it's sized up a bit, and set to the vertical list mode. If only you could drive it from the keyboard ... 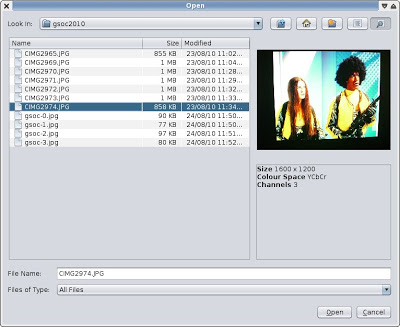 Well I added an image preview to the one in ImageZ anyway. The info area is a bit naff but I just grabbed some of the generic meta-data from the ImageReader. The images are loaded/iconised in the background, of course. I first tried using a SwingWorker and cancelling it if a new image was browsed - the problem is that the image loading ignores the interruption and keeps going until it's just about finished anyway. So it didn't really suit.

Then I tried writing a loader using the lower-level api's which have an explicit cancel request. Still no go - it just ignores the abort until it's finished anyway. Damn. So I gave up and just launch a new thread every time. If the thread gets interrupted/cancelled I quit the thread as soon as I can, otherwise the image is loaded, scaled, and then dropped into the preview box. Given it loads the full image to create the icon (if there's no thumbnail in the image, which there usually isn't), I should hook the loaded (or loading) image to the OK button too - images will load immediately then.

For 'normal' sized images it's quite quick anyway although I guess it needs to handle the edge cases to avoid a backlog of threads. Actually loading a bunch of images using multi-select is pretty fast - loading all of the 14 images so far from this series of posts at once is under a second - at least 3x faster than GIMP on this box. Maybe it's the threading (and yes, not entirely fair, a full app vs a toy).

I also hacked up a very nasty bit of code which lets tools add information to the display window itself.

Right now the tool has to handle calculating the dirty regions and other crap so I need a better solution, but having it there will let me investigate.

On the other hand it is pretty flexible. I thought i'd start poking at my 'affine' tool - trying a rotation to start with. First just to see how slow it would be, and then to try ways of controlling it. The tool just tells the image window to repaint every time the angle changes, and then its paint callback just blats the image over the top. And it's not too shabby by default speedwise - even the bicubic filter is around the same speed as GIMP's nearest neighbour for medium sized images. 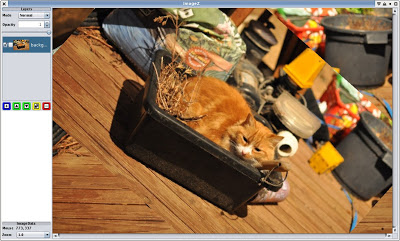 Then I played with a few other ideas - in the above shot the image is scaled down first, set to acceleratable, and then drawn as the mouse moves (using nearest-neighbour in this shot). i.e. it runs very very quick once you start rotating the image (as fast as the mouse sends events). Unfortunately for very large images the initial scaling can be quite slow, although it is probably still worth it. Scaling down large BufferedImages seems unusually slow so perhaps scaling it myself in integer increments would be faster for things like this where I just need an approximation. Just 'scaling' the image by 1, and converting from a `BufferedImage' to a `Toolkit' `Image' makes a huge difference too as it presumably gets some hardware acceleration.

As can be seen from the shots I also worked out some problems with the Nimbus theme - it's JTable widget handles the default renderer types a little differently so I had to change the column type to an IconImage rather than just an Icon for the layer icon. Nimbus looks ok - the scrollbars are a bit ugly/out of character and the general spacing is a little loose but it looks modern enough. And I added a little info box to the bottom of the toolbox. Now what to put in the white empty area ...

And I fixed some bugs in the handling of layer translation. I haven't hooked any tools up for that yet but it should hopefully just work when I get to that point.

The GIMP's taken to hiding all the control boxes when I change virtual desktops now, and wont let me move them to other desktops either. I wonder if it's trying to tell me something.

Tagged imagez, java.
I got a fufut. | XBMC BeagleBoard GSOC '10 Wrap Up
Copyright (C) 2019 Michael Zucchi, All Rights Reserved. Powered by gcc & me!