... so what better to do than spend the whole weekend hacking on code.

So since last time I have kept poking at my 'graphics editing' programme, and a few things are finally starting to come together. I think enough even to give it a name, for which I decided ImageZ worked well. 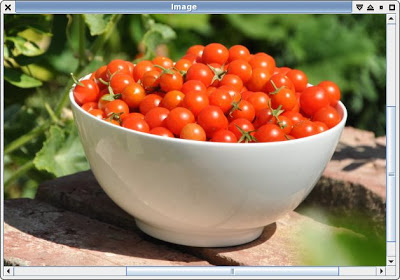 I had another try at the Java2D compositing system, but this time I wrote my own alpha compositor designed just for the float format i'm using. Much much faster, still slower than the custom code but it might be an option although I have other plans going forward. I also fixed my alpha blending code - I kept finding the tool-layer blend darkened when I applied it to the target layer. Not pre-multiplying alpha properly, and not applying alpha properly. Now it works nicely.

I got the paint applicator tool working - it just steps along the drawing line and puts a dab of paint every time it's travelled a certain distance. This allowed me to very easily write a `texta tool' and a 'fuzzy brush' tool in half a dozen lines of code each - just by changing the Paint applied to the dot, one just has a radial texture. Since the paint is applied itself using a Shape, it can be anything so this covers a fair whack of the drawing end of things. And it wont take much to add pen jitter implement an airbrush, or bitmap brushes.

I have the backend but not the front end for the selection tool. It can select arbitrarily shaped regions with all the boolean operators applied to each sub-selection (including exclusive or), along with feathering. I just used the Area class to implement most of the logic, and then spent way too much time trying to get a gaussian blur running properly. I'm not sure how i'll go about displaying the selection. The gimp draws lines around individual pixels which is sort of interesting, although it doesn't really work well at showing anti-aliasing or feathering. I can use the path object to draw lines for the square, ellipse and 'free select' tools, but that wont work for select-by-colour and so on. 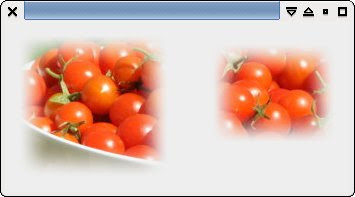 I had a look at saving files in a way which preserves the layers. I was just going to write a zip file with the layers stored in separate `standard' file formats. Unfortunately I couldn't get anything to save out the float images (i'm not sure what the TIFF saver expects or if I need to get JAI for that), so i'm not sure what to do there. There are quite a few Java image libraries so I probably just have to look around. I had a go at writing an OpenEXR loader since that is a pretty simple format that supports floats. The file format is nice and easy to parse and after a few hours I had something which parsed pretty much a whole file. But unfortunately i couldn't work out the format of the line chunks - I was getting something out but the stride was out - the image was offset and squashed and stretched and nothing I tried worked. Not sure the C++ code I grabbed for doing the half float conversion translated to Java 100% correctly either (should be, assuming the Float functions are taking the same format for ints). Since I wasn't making much progress and I was getting really tired I thought I'd better move onto something easier before it got me too bogged down. So no saving for now.

I also had a go at adding a frequency convolution mechanism. The speed is ok - visually within 1-2x the speed of the Gimp for a gaussian blur and I think it's using 2 threads for the FFT most of the time (about 0.5s for an RGBA image about 800x600). But with big blur factors or big motion blur you get the edges bleeding in (although it still runs at the same speed), so I need to pad the data first (extend pixels I guess?). The mathematical neatness of it is nice though and it allows for some interesting things that can't be done with a spatial-domain convolution kernel.

Then today I got really side-tracked. I really really hate having menu's attached to every window. Just such a huge waste of space, ugly and so on - and the 'animated slide to hide' crap just shits me off no end since it just gets in the way. So I had a go at trying to work out how to display AmigaOS style menus for Swing applications. They're hidden till you hit the menu button, then they work like any other - but it allows that part of the screen to be used for other things. After a very long journey of dead-ends I finally have something that works remarkably well. I had to add a mouse-listener to the glass pane of every window and I have to manually track and route mouse events. Basically I created simple sub-class of JMenuBar that uses a PopupFactory to present it as a popup menu instead and close it once the selection has been made. I can position that anywhere on the screen - e.g. at the top a-la-AmigaOS, although for now i'm sticking to putting it on the top-left of the window because top-left on a dual-screen display is a bit of distance away. It is no doubt rather hacky and almost certainly not portable but it's still bloody fucking cool. 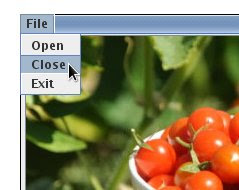 So that's where the menu went!

I even hacked up the JFileChooser so that it opens in 'details mode' and a lot taller (why do they open it up so unusably small by default?). For that I have to walk the widget tree and then programmatically 'press' the details button. This makes it look basically the same as the ASL file requester (AmigaOS again) although unfortunately it isn't nearly as nice to use - the ASL one let you navigate easily from the keyboard without having to tab around to every single gadget (e.g. key the up or down cursor whilst the filename gadget has focus and it moves the selected item in the file list whilst dropping it into the file entry for editing, hit return on a drawer and it opens it rather than giving your application a `file' it can't use). It also ran asynchronously much better (the GNOME one is getting dreadfully slow).

I had a bit of a time trying to work out how to get the image window to open the right size. revalidate() is the key here. Although on big images they're opening bigger than the screen now :( And no matter what 'setMaximumSize()'s I used it makes no difference. Known bug.

I got zoom working. A lot easier than I thought it would be in the end. I just had to add an AffineTransform to the drawImage() call, do a little bit of scaling so the flattened image updates properly based on paint events and visa versa, and finally scale the mouse events for the tools. Then it just worked. Simple. Really fast too - basically instantaneous - since the only thing scaled is the backing image on its way to the screen. I have it hooked up to the keys 1-8 for now although I don't have it centring nicely when you zoom yet.

2x Zoom, with the two paint tools so far and different opacity settings.

I have a small toolbox and was fighting with Netbeans earlier in the night trying to get the widgets laid out nicely. Not entirely successful there. There's some painful stuff when you try getting any of the various layouts like GridBagLayout's to size to their content, and Netbeans doesn't let you set glue in BoxLayout's. I will probably just resort to hand coding the widgets, I guess there isn't really that much that needs doing anyway. I don't have it all hooked up, and I only have 'normal' blending mode in that menu, but I do have enough backend to implement the options shown.

Yes, the toolbox has a menu too (hidden).

I'm quite pleased with the progress so far - I have had some extremely late nights so it's sucked up quite a few hours (and i've been doing plenty of hours for work too; I work to forget). I'm not that happy with the way the layer window is implemented and how the tools are interacting with the image. I probably need a 'tool layer' as part of the image somewhere and not as part of the tools. And likewise the 'toolbox is the state' isn't really clean - although that's more a matter of re-factoring into some other static state class.

I'm also pretty pleased with the performance, considering I haven't exactly done much in the way of optimisation and everything apart from the FFT is only using one thread. I'm throwing around float images around like nobodies business and apart from using a keg of memory it's all nice and snappy (it's not really fair to compare a full app to a tech demo but certain things like the image window is noticeably snappier when magnified, probably because it's not bothering with tiles and Java does a bunch of multi-threading behind the scenes and doesn't need to deal with event polling all the time either). That's a little surprising since i'm using a non-standard format which is at least an order of magnitude slower for Java2D than a standard one. Part of the reason for playing with this was to have something I could accelerate using OpenCL, but at least right now it seems barely necessary (until I get some complex filters going). I'm kind of in two minds now - whether I just take out the float stuff and see how well it can go when using a supported backend format, or whether I look at moving most of the pipeline to OpenCL for the fun of it (or OpenGL I suppose, but that misses the point of what i'm trying to do). I wasn't originally going to support different data formats, but perhaps if I think about it a bit more I can find a way to experiment with multiple pipelines without adding a whole pile of support framework. I will keep most of the 'tool layer' or structured graphics layers (text, etc) CPU side regardless so it might be fairly easy to do.

Got a work deadline in under two weeks, so I might be a bit busy for a little while :-(