Finally a day with a bit of sunshine ... did a backlog of washing, pulled weeds for 3 hours, mowed the nature strip and started emptying out a garden shed I need to move. All in all a productive day.

I spent most of the rest of the week since the last post hacking away on ImageZ, although I took it a bit easier with not so many late nights, and had room to fit in an extended binge drinking session with a couple of mates. I guess next week I'll be back to work again. 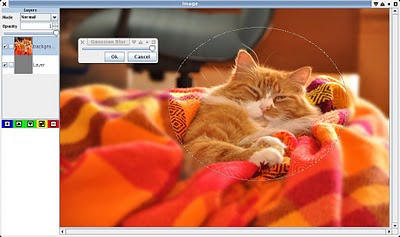 I bit the bullet and put a 'tool bar' in. I kinda hate those things ... but the alternative was lots of popup windows so I don't really think I had much choice. Thing is if you're working with layers you really need them handy so it seemed the obvious place to put it. Also means i can link them with the document and that simplifies a few things both for the code and using it. At least you can show/hide the whole thing with a single keypress. Still may change it to an internal window too. Not sure what else I will put there - I suppose something about the current tool may as well go there as well. Which might mean less need for popup tool selectors ...

I added ellipse selection - very easy. And hooked up a few menu's for select all/clear/invert selection. I started looking at editing the 'current' ellipse/rectangle but I haven't gotten very far yet - it adds two invisible hit-boxes at the start/end point that lets you drag it around so the mechanics are there, I just need to present it somehow. Since I need similar facilities for structured objects I may be able to re-use code or at least how it works.

I fixed most of the state tracking issues - now the window that contains the drawing surface is listening to mouse events and re-routing them to the current tool, rather than the tool listening itself.

Found a workable method for the menu item actions to find out which window invoked them, so I added accelerator keys to them, and added all the tools to a menu item too.

They `broke' again when I added the blend mode and opacity to the layer viewer (yeah I hooked those up too). Turns out I wasn't pre-multiplying alpha for the result (which wasn't necessary for the tool layer). So this has hopefully fixed all those problems up ... until the next lot come along. Oh also I had started with a checker-board pattern as the base data before starting the composition ... which was a bit mistake even though it looks the same for normal blend modes. Now I just blend the result into a checker-board pattern once I have a composed result.

Moved the undo tracking to the image itself rather than have a global one. I'm still tossing up whether I use the Swing UndoManager (which lets me track state changes from other swing objects), or stick to my own which is simpler ...

Made a couple of other plain and sparse-tile backends for different data-types. Unfortunately the sparse int layer isn't any faster than the sparse float once since it has to go through the same generic code-paths, although I guess it uses less memory. Memory usage is a bit of problem - it uses a lot. I guess with the GC though you can't do much about that and it's the price you pay for it running quickly. The 'native' int-based backend is very quick though. I still need to do a 64-bit backend (16 bit elements) but that's relatively simple. I stuffed up a bit and my layers are RGBA instead of ARGB - it doesn't really matter since I data-convert anyway ... but maybe it makes that less efficient. It is what OpenCL supports though.

Played with a lot of different ideas to do with threading. Right now drawing is on the event thread - if it gets too much to draw it starts dropping mouse events. I played with running the layer composite rebuild on another thread, and running the tool rendering on another thread. Hmm, various trade-offs here and I can't say i've settled on anything yet. Given that the custom image types are so slow to draw to using Graphics2D, I may have to consider using one of the built-in 8-bit types as a tool layer - for most operations this is more than adequate (the only real place I can think of it not being is with fine gradients).

Actually I want more of a 'structured graphics' layer. Well, ... that's really a whole project in itself. I just played a bit with the low-level text api's which can do word-wrap and so on. Text is always a bit of a pain and this isn't any exception. I'll surely be able to do everything I want, but there's a lot of api's to learn first and adding the right level of front-end is the hard bit.

Ultimately I want there to be a layer type that contains more than text - possibly multiple text and graphics objects. Yeah i'm dreamin here ...

Still no real save (I have some test code but it isn't hooked up). I came across the OpenRaster format, which is pretty much what I was going to do anyway - except the XML bit. So I'll probably use that for compound images. Friggan XML.

Still thinking about possibly doing a light version of the interface. Maybe drop out the layers and just support 8 bit RGBA (for memory use and simpler i/o). Mostly so I can test out ideas without being bogged down in complexity and try to get something I can use.

Well after writing all the above and forgetting to post I looked into first capturing the screen and then when I found out that was so simple I moved onto the clipboard.Capturing the whole screen is one line of code, but trying to find where a given window is seems to be beyond Java. So I cheated a bit and invoke xwininfo and read the content from it's stdout. That pops up a cross suspiciously like the one that GIMP uses to select frames for grabbing, and then spits out some window details. A simple loop that parses the lines and I extract the window bounds and now I can grab windows too, at least on GNU systems. I still need to add a little requester asking for some details but that's a piece of piss. 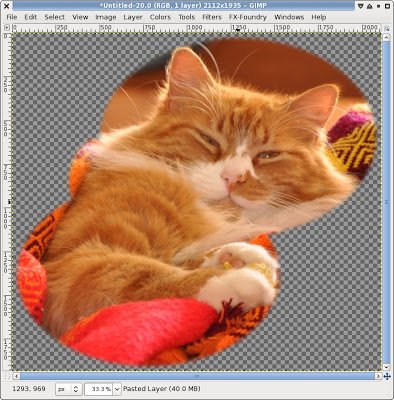 Clipboard support turned out to be almost as easy, so I added that too. I've done it before using gtk+ and basically it works the same way - negotiated content using mime types - but all the details are done for you and you end up with a BufferedImage if that's what you're after in a line of code.

I did come across one issue (bug?) if I alpha-select something in GIMP it pastes fine, but if I alpha select something in ImageZ, paste to GIMP and then copied from GIMP again it comes back with no alpha by default. Looks like the image has been converted to low-quality JPEG as well. If I explicitly ask for a PNG file it works fine, but then I suspect it will force all selections to 8 bit even with internal copy/paste ... (assuming it isn't already). I guess nothing's perfect.

Well I guess that's enough for one weekend, off for a long ride in the hills to try to burn off some of this winter/hacking fat (although with beer, grog and pizza possibly at the end of it, it may not go far toward that end).