I had just a few limequats left on a rather sickly looking tree I have in a pot so I thought i'd make some cordial from it before I used them up ('syrup' for americans). They have a very nice flavour - much as you'd expect, ripe lime mixed with kumquat, so a little like a tart orange/lemon. I threw in a couple of lemons too since the limequats were a bit small. 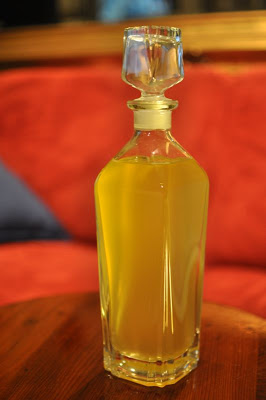 I ended up with nearly 2 litres of this nice golden liquid, plus some glace peel I can use in a cake if I remember to save it.

I dropped the sugar a bit off the recipe I found on the ABC, and a bit more citric acid because I don't like it too sweet and a bit more tart (and the pot was too full!). I used 1kg sugar and about 1.5tbs of acid.

The tree was looking pretty ill and I think I overdid the treatments and now most of the rest of the leaves have fallen off! It was much like that last year by mid-winter too, so I guess i'll have to wait till spring to see if it will recover - I hope so because I love the flavour. Being in a big pot I didn't keep it watered properly over summer either. I also found that my lime tree has borers in the trunk and given I also failed to water it properly over summer it wasn't in great shape anyway - may well lose that one. If so I might get a native lime (if i ever see one in a shop again - saw one once, 5 years ago), or a more acidic lime (or lemon).