Indecision, games, and the rest

Wow, tired. Then again I was up till 3am last night hacking on some MMU code, so that probably isn't surprising. And some damn person called me with a wrong number at 8:30am too. Been a long couple of days. Oh hmm, now i remember, I was up for 23 hours on Saturday too - after a very early awakening that led me to the last post, I spent all afternoon helping a mate put up a fence, then a few beers and pizzas and a late night later ended up crashing about 3am. No wonder it feels like I need a weekend, and it's only Tuesday.

Been very busy with work, and had a few wins today - I think i'm all out of endorphins now, so I can't get back into the MMU code as i'd planned to. As a side note, whilst generating data to test some algorithms I accidentally created the image below. What took me about it is that it is surprisingly uncomfortable to look at - it seems to jump around randomly, about 3 times a second (at least on a bright LCD monitor). I don't think it's just my tired or coffeed eyes ... 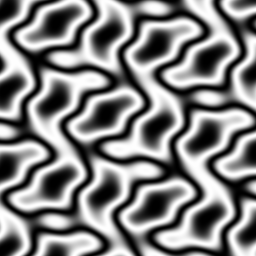 On the MMU code I was writing a more comprehensive bootstrap function. One that initialises the MMU to relocate the loaded image to somewhere appropriate, and in a way that it can remain in use for the running system. I have some code, and it's nice and compact but I'm still undecided on the final memory map. For example, the ARM CPU on the Beagle can have two page tables, one for high addresses, i.e. the system, and one for the rest. If I use that feature it forces the system table to use at least the top 2G of the virtual address space, which was different from what I had in mind. Not that it matters I guess since the machine only has 256MB of memory anyway ... so probably no big deal. I'd like to use that option since it simplifies the management of dynamic globally shared data the way I was thinking of doing it (i.e. shared library code/rodata). There's a few other details i'm still undecided on too, it would be nice to use section pages for instance (1MB pages that only require a level 1 PTE).

I spent the few nights earlier working on the higher level MMU code, managing translation tables, allocating physical pages and thinking about how to implement efficient `agile' (migratable) memory. The actual page table manipulation is pretty simple but you need a fair bit of infrastructure before you can use it.

So I also wrote a simple first-fit memory allocator that uses an AVL tree to coalesce free blocks. It's something i've researched quite a bit in the past and first-fit works surprisingly well for a general allocator particularly if there's a quick way to coalesce frees (the main drawback being not-so-great worst-case allocation performance). Even though I've written one before (for AROS), I'm using the AVL code derived from the parent-linked one from libavl, since I couldn't find the final version of the one I wrote and it's probably better anyway. I modified it though to remove the iterator and tree objects so it can be used without requiring any additional or dynamic memory. I also poked the balance factor into the low 3 bits of the parent pointer so I can jam in the free block size into 16 bytes - which determines the minimum allocation granularity. If the linear search for the first-fit allocation proves too inefficient, I can always add another tree and bump the minimum granularity to 32 bytes which is probably still ok. Although the overhead of managing two trees may not be.

And I played with a couple of different ideas for allocating physical pages. I tried a bitmap, which is pretty simple but tricky to allocate large ranges (>32 pages), has poor worst-case, and has no room to store any meta-data. So then I went to an indirectly linked list of words, mainly because I then have somewhere to store extra per-page data like a shared refcount, or other bits of information. But that's even messier to allocate any range more than 1 block in size; although I thought I didn't need to do that, I do at least need to allocate 16kb blocks for the first level translation tables (although I only need 8kb if I use the dual-translation table setup). So I may end up going back to the idea I had with my other os which was just to track the holes in the address space using a tree - much like with the gp memory allocator but without being able to use the holes themselves to store data. I suspect I chose to do it that way for a reason - it has a reasonably high worst-case memory requirement, but that is unlikely, and bounded. Since I will need the functionality for a global virtual address allocator for the 'agile' memory blocks, it probably makes sense to just use the same thing.

For something different i'm also trying to make some biltong. Thought about it for ages but never got motivated enough to try it. I was at the Central Market on Friday arvo and grabbed some dried meat and super-hot sausage and found it particularly yumscrious. But the extraordinary price helped me to decide that it was time to try to make something like that myself. I just started with 1kg of beef to see if it works or if I just end up making a batch of biological warfare agent. I should really have given the kitchen a good clean first. I thought i'd skip the receipe that starts with '25lbs of beef or game', at least to start with ;-)

Read an interesting article a few days ago about five creepy ways video games try to get you addicted. The point I found most interesting was the assertion that games are basically taking the place of an un-fulfilling work environment, and particularly since the points mentioned seem to match my hobby and at least the 'good bits' of the work I do:

Maybe that's why I don't get terribly obsessed with games - in effect i'm already playing one. Particularly of late, this has been very obvious to me - I can't put a problem down until I get it to work, or at least finish some little mile-stone along the way. If I can do that I can go away and feel a bit pleased that that 'target' has been reached, even if I know they will never end. On the other hand, if I can't it can be very disappointing, and it can even act as a catalyst to something worse since I have no other distractions just now. The other point this ties into is quite interesting too:

What is a game?Well, we humans play games because there is a basic satisfaction in mastering a skill, even if it's a pointless one in terms of our overall life goals. It helps us develop our brains (especially as children) and to test ourselves without serious consequences if we fail. This is why our brains reward us with the sensation we call "fun" when we do it

Basically games are a way to learn stuff. I guess a bit like fizzy drinks or other food with flavour but low nutritional content, some of these modern games are simply abusing key survival traits honed through evolution over millions of years simply to make a buck. This is what the world has become, hollow food, hollow entertainment, and hollow learning, for a hollow existence?

Actually I'm not so sure any of the survival skills gained through evolution are much use to us any more. Most of them don't work when you have unbounded supplies of high-energy food-stuffs within easy reach, spend all of your time sitting on a chair behind a desk or in a machine screaming across a layer of processed oil, or simply have so many people that there's no room for them or any other animals simply to live in peace. Evolution only optimises based on the past, not on the future. Yes, we're all screwed - keep an eye on the fish.