Ahah, well starting work again Monday. Sounds like it could be more interesting than I thought. But I guess time will tell. It might be keeping me pretty busy for the first few months too, but hopefully I still have time for the distractions offered by the beagleboard.

Rode to a meeting and rather than taking the train, which was probably a bit unwise. Apart from not preparing properly and meeting in a cycling jersey ... the weather was unexpectedly hot yesterday (the forecast the day before was about the same but it was no-where near as hot on the road). Every time I put a bit of oomph into it I started to feel a bit weird from over-heating, so had to take it pretty easy most of the way (only about 24km each way). Apart from not having ridden much lately and so not having a decent summer acclimatisation, I think it mostly just comes down to badly needing a haircut and getting a super-hot head from the bouffy hair. Well, having a dreadful hangover and 5 hours of sleep didn't help i'm sure.

The day before I got out and had a look for old computer stuff in pawnbroker shops. Didn't find much, although there were a couple of shops tucked away which had a fun range of old tools and other junk which might merit another visit one day. I did pick up an old keyboard that looked hardly used. I took all the keycaps off and gave them a good wash, and it looks almost new now (apart from putting the - and = on the wrong way around). Oh apart from that **it's just a keyboard** - none of those bullshit `multimedia' keys or even worse - windows keys! It's even got a steel base. It's the little things sometimes ...

On the way home yesterday I ordered some roadbase so I can get stuck into the retaining wall at last (last day of holidays - the one i partly took to do such things - typical). 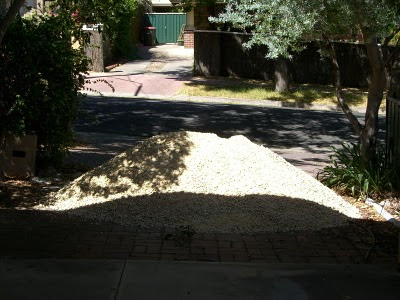 It got delivered at 8am - and I was all keen to go get a haircut so I can move it without passing out, but somehow the day is slipping away and i'm stuck doing little things around the house again. Almost feels like I still have the hangover from yesterday morning - but I didn't go out last night at all. I think I just need a really good sleep (and maybe some better meals), but seem stuck going to bed too late and rising too early. 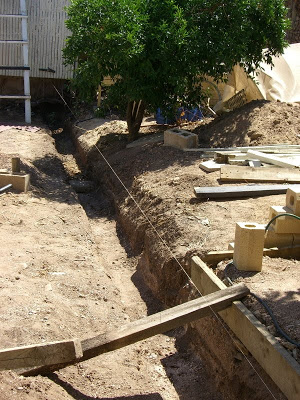 The trench isn't quite right, and I probably need to dig out the stairs before starting to fill it, but it's almost ready. I should be out there now, but it's a bit warm to be working in the full sun in the middle of the day (when you have a choice anyway). Have to drag myself out a little later to get stuck into it.

Tagged biographical, house.
Sick and tired of being a permanent beta-tester. | Smooth as a baby's bum
Copyright (C) 2019 Michael Zucchi, All Rights Reserved. Powered by gcc & me!