Smooth as a baby's bum

Well I didn't end up getting out, but I had a break for a while. I also started thinking about what I want to do now I have interrupts working and decided I couldn't be bothered doing too much with the vblank demo. But since there was nothing on TV for a bit I tidied it up and committed it as is. 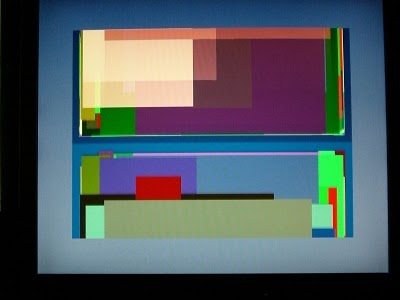 Yes, not much of a screenshot, but I thought the page needed some colour and a break from all the text of late. It just smoothly scrolls from one screen to the other and back again, drawing one box on the lower screen every time it's fully hidden. Demo in irq-scroll.c, with the interrupt code from yesterday in exceptions.S.

So what to do next. Well there's still the idea of a little game or demo or so, but i'm lacking a bit of inspiration, and besides, a bit of support to actually run the code in, for things like sound. So i'm starting to think about working on a little real-time micro-kernel.

Many months ago I had been writing one for x86 but got a bit pissed off with all the PC crappyness, and found something more interesting to do instead. So i'll probably start with that, although i'm not sure how much i'll end up using (not that I can remember the state I left it in anyway). For example, currently it does all the VM and process management inside the kernel (it made it simpler at the time), but I want to move that to a process instead so the kernel can work without any pre-emption or locks. Basically the goal is to make the kernel as simple as possible (nano-kernel?) without the simplification getting in the way. What I had been working towards was something like a mix of Minix 3 and AmigaOS; taking features like memory protection and processes from Minix, in addition to the asynchronous non-copying message passing, shared libraries, tasks, and the device mechanism from AmigaOS, with a bit of a reworking to make it all fit. Ahh well, maybe a tad on the optimistic side so I wouldn't hold my breath, on the other hand apart from device drivers there's not all that much to the core of such a design.

Not sure if i'll put it in PuppyBits or another project, but for now I still need to work out some basic routines like context switching and so on so i'll definitely put that stuff in PuppyBits at the least.