Then a bomb went off.

Finally got out in the yard late yesterday, and this: 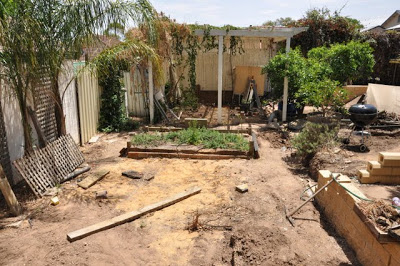 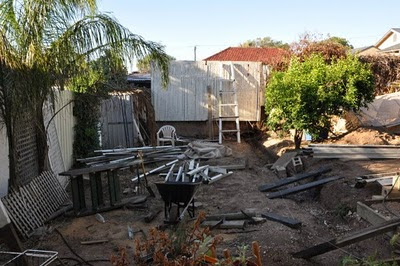 What a mess. Fortunately it was easier than I had anticipated, it only took a couple of hours for all that destruction. The posts were just sitting in the ground so they were pretty easy to remove.

Actually that first shot is from before I removed all the paving and dug the foundation trench for the retaining wall, so it's more like a weeks work between photos (or 6 weeks realtime ;-).

Getting a ducted evapourative a/c installed today - was originally penciled in for Monday so I would presume the guys are quite happy it is a nice 25 today rather than 42. Although they're not that pleased the ceiling is a very old style plaster type, which they didn't quote for, but I guess that's what the salesman gets for being too busy to visit the house first. Looking forward to getting some fresh air through the house, and during the last heatwave having the split system running all day was both expensive and dried the air out to an uncomfortable degree. And it'll be nice having the bedrooms all cooled too.