So I haven't been spending all my time just on the new computer, I've also been doing some cooking. It's quite a laborious process and the crutches keep getting in the way but most things only require short stints standing while the oven or mixer or some natural process takes it's course. Reminder: I'm on crutches until after xmas due to a broken hip. I can't go anywhere or do much or carry anything and even beer makes my foot swell up so I can't even bloody well get drunk.

Yesterday I made a pretty good approximation of a baguette - perhaps a bit too soft but it made a great chicken sandwich for dinner. And today I made a '(kneaded) no-knead' bread, and a couple of ciabatta. 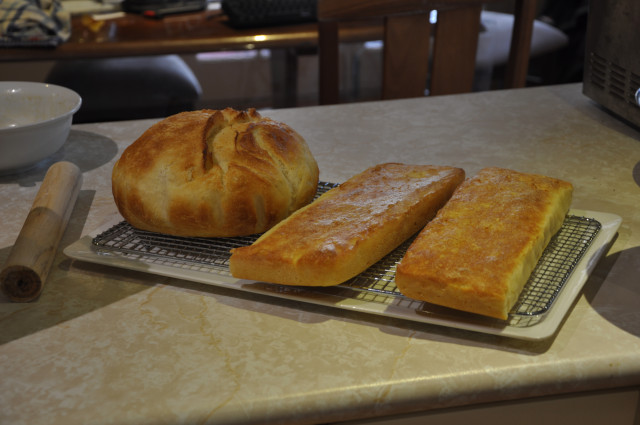 A dutch-oven bread and a couple of ciabatta.

I sort of fucked up the latter because the starter was too cold in the fridge so the final dough was far too wet, but perhaps it turned out OK. I made some last week and didn't cook it long enough but otherwise it was an interesting bread with an almost rubbery texture quite unlike the standard recipe.

I'm going to write down the recipes I used here in part so I don't forget them. One might notice a lot of similarities in the steps - well that's just how you make bread I guess.

I don't normally bother adding salt but most bread recipes include it, perhaps 0.5 tsp. I notice the yanks put sugar in their recipes - sometimes alarming amounts - so maybe they just need the salt to make it palatable!

The bread improver could just be more flour. I use general purpose flour which is a bit too weak (low protein) to make good bread, and this helps make up for it a little bit. Adding an egg works really well but then you need to adjust the dry/wet ratio to account for it (just add a bit more flour usually).

Another trick which works on any of them is to spray water lightly a few times while it's baking. This will create a shiny hard crust by simulating a steam oven. I usually do it if i remember to as it doesn't take much work and is a nice touch.

I use a standard-sized kenwood chef mixer, and I have a new Bosch oven that has an almost moisture proof seal (nearly steamed my face off a couple of times opening it). I highly recommend a scraper (aka "baker's helper"). Finally the cooking times are a bit arbitrary and you can always go longer if you want more crust.

Up to about 100g of the flour can be replaced by other flours like semolina (more moist) or bulgar wheat (whole-meal like). This is probably a bit wet for a true baguette but it makes great rolls and buns as well.

This is a simplified version of a stupidly complex multi-stage recipe I found on the internet. I've only made it a couple of times so I might need to make some changes.

Update: So this just isn't working right, yet. I tried a bit last night and it's texture is more like a crumpet than anything else! I'm not sure if I'm just not letting it rise enough before baking it, or the mix is a bit too wet, although I suspect it's a bit of both. Yesterday I ran out of hours in the day and cooked it because the oven was hot but I probably should've left it (much) longer. I will need to experiment more, but will try with a reduced recipe as this makes a lot of bread!

Update: Take 2. I reduced the water and flour a bit and let the formed loaves rise for much longer. The bread itself is soft and 'bready' with a slight sourdough taste. The crust is OK but not thick enough, it probably needs more time in the oven. The dough is still so wet that it 'runs' as it proves to fill the available space, I'm not sure how I could get around that other than less water again. It's nice bread however.

This was based on a '2 hour' 'no-knead' bread recipe but then I realised I was using the mixer anyway so why not just let it do it's thing. The original made more of a bread-cake, and this makes proper bread but with a 'rustic' look and a great crust. I just had a piece and it's really very good.

This one can likewise have some of the flour replaced.