I've been looking for a new keyboard for a while. My venerable old (old!) litetouch honeywell keyboard has finally worn itself out. I tried cleaning it but that probably just damaged the contacts further. It's a really amazing design, no screws in the whole thing, the contacts are just printed on a thin plastic sheet that folds over itself, and the springs are just a single silicone overlay which sits over it. Virtually silent and yet the keys have a very positive bump action. Each row of keys is a single injection moulded piece - almost like the way a plastic aeroplane model comes - that clips off the base. You can just unclip them all and chuck them in the dishwasher!

It still works but the left quarter is a bit finicky if you don't press hard enough. Many of the clips which are part of the injection moulded parts have snapped off. Some for example held down the contact between the keyboard sheet and PCB which houses the MCU and LEDs so the contact isn't as solid as it used to be.

I actually semi-retired it some years ago, i've just been using it on a secondary machine here. 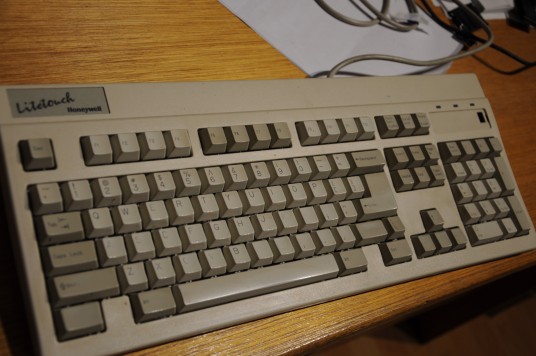 Spot the emacs user. left-ctrl completely obliterated. right-shift is from all the C/Java language symbols. Not much left of the cursor keys. N and M were very early victims of AmiWM - which I haven't even used for years! No fucking windows keys and a proper bloody space bar!

Real pity, just comparing the key feel now it's still amazing for the keys that still work, but C and A mis-firing often enough to become obnoxious and it just can't be repaired. I can't even remember how I ended up with it or even when, I certainly didn't buy it. I think I got it through a mate (Jamie) who collected piles of computer shit. It seems to have been made in 1991! I was still using a C64 in 1991, my first year at uni.

Anyway i looked around a bit and didn't bother doing anything about it for months until last Friday when I ordered a couple of "ducky one" keyboards online. Only one shop in Australia seems to sell them, albiet in 600km away (i.e. the nearest next town). Locally you can only get microsoft keyboards or some RGB "gamer" monstrosities at exhorbitant prices. 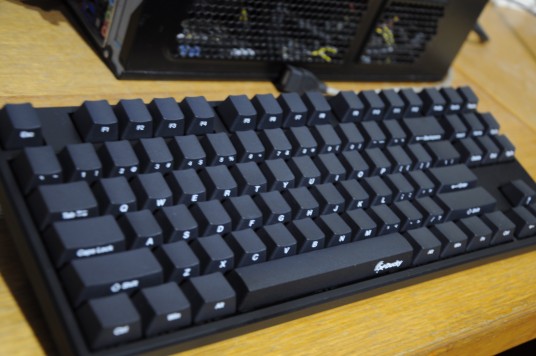 A Ducky One `ten-key-less', with the all-black tops. I got the cherry-mx brown switches.

I don't really know anything about them, or what appears to be a whole computer sub-culture regarding 'mechanical' keyboards.

But I liked the idea of a keyboard with no markings, i've worn a few off over the years so this should be immune to that at least! Actually from a sitting position you can read the front face of the keys not covered by your hands anyway. It was also a bit cheaper. I also really liked the idea of the `ten-key-less' design - I've always found the numpad a fucking pointless desk-waster.

The description of the `brown' switches are soft but with a bump - but they're not quite as positive as the litetouch was though, and definitely much louder particularly when they bottom out. If my sister ever types on it she'll make a racket as she really thumps the keys and types like she's on a mechanical typewriter (on which she learnt). 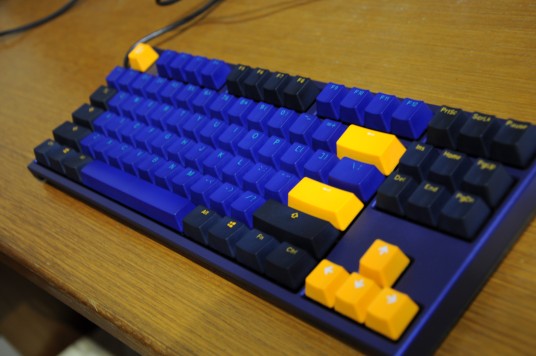 A Ducky One Two `ten-key-less', with the Horizon colour scheme. I also got the cherry-mx brown switches here.

And this one really just because I liked the colours. It's quite pretty! This is a newer design and feels a little softer and quieter but i haven't used it much yet.

They both come with a couple of extra key caps in contrasting colours (pink for the black one), although a few of the keys are for the non-existent numpad. They're both fairly heavy and very solid, basically no flex in the body.

I'm still getting used to the tiny differences even though the layout and dimensions are identical to the keyboards I was using. Probably the main difference is that the very top of the key is slightly smaller so they have larger gaps in between, it just throws out my touch enough but it wont take long to get used to them. Oddly I end up not making typos so much as typing a completely different word? I mostly type on my work laptop anyway, whose keyboard isn't fantastic but it's adequate.

My desks are always full of shit so the smaller size is handy as well.

I wouldn't have minded a bit more of a positve feedback on the key presses, but I guess I will get used to it and they aren't squashy at least. I suppose i'd better, the pair of them cost $250, but given the amount of time I spent on the damn machines it's justifiable. I only really needed one but this saves more desk space, and maybe i'll take one to work if i ever spend enough time there.

Another tool looking to be upgraded is my home machine. I'm thinking of getting a ryzen 3K system at some point, but i'll probably umm and ahh over that for months more yet - or just spend on a whim. The X570 boards are just too overpriced and there's basically no ITX boards to be had either.

Update 21/7/19: Short mini-review. I've been using the D1-2 (the blue one) on my home machine enough to get used to it. In a word: very good. I was at work using a keyboard that I thought was ok before (a HP workstation keyboard, one of the flat square-keyed ones) but it felt like typing on soggy bread - although this was the project managers keyboard and not my pc of the same, and well, he eats at his desk.