After a few iterations i've managed to get biltong making down to a pretty streamlined, 'somehwat lazy' process. It relies on the butcher (aka supermarket) doing the brining.

First get the spices ready. This is both important and a bit arbitrary. You can find recipes on the net but the main ingredients are coriander seed and black pepper (and those starting with 'one whole freshly butchered springbok' aren't very practical).

Here's a simple one. It was enough for two small batches.

Actually I didn't write it down so these numbers might be a bit off but it's about right. Thigs like allspice, fennel seeds, ginger, cinnamon, paprika, and so on can add a nice tweak to the basic recipe. I always add hot chillies as a matter of course, of course.

Not terribly important here but an Australian metric tablespoon is 4x teaspoons (20ml), not the usual 3 in the rest of the western world. 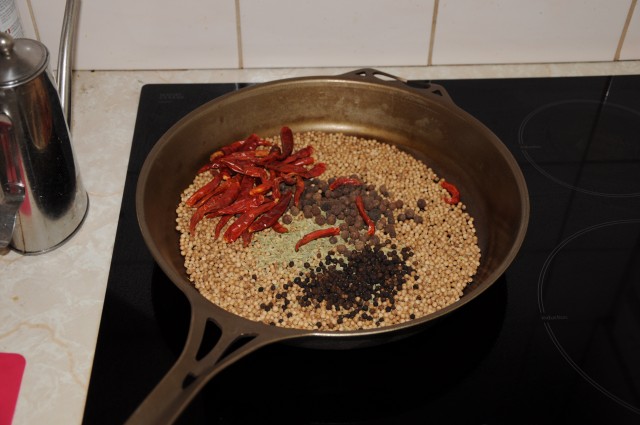 Ideally give them all a bit of a dry-roast in a pan or the oven to bring out the flavours. It isn't necessary but its worth it and it smells great. Basically just keep stirring over low-medium heat until they become aromatic and the chillies gain a bit of colour. Here i've just started roasting them.

Then powder them. If you have the time and the equipment using a mortar and pestle will produce a more aromatic powder; but i usually just use a blender and keep going until it's done. Don't breath it in if you've used any really hot chillies.

I also have a small precious supply of dried habaneros i made a few years ago and I threw a couple of those into the blender. 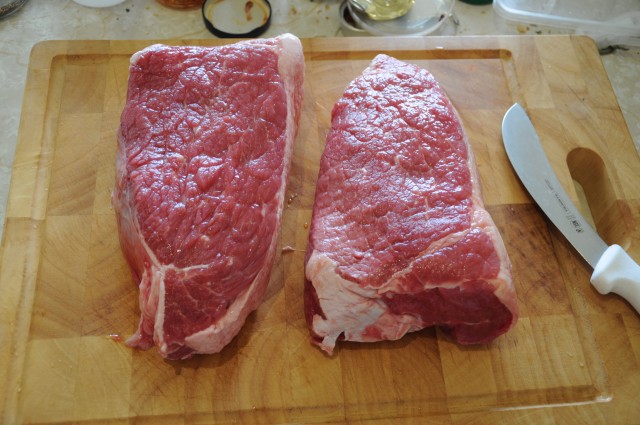 Next the meat. I wait till corned silverside is on special ($8/Kg) at my local Foodland and grab a couple of them. I try to get the largest ones they have (>1Kg), and given the packaging is often opaque its a bit hit and miss as to the quality you get - ideally good solid meat with little fat and gristle. Here i've just unpackaged them and wiped off the slimey brine residue, these are good cuts to use. Each one here is about 1.5Kg.

Corned silverside - corned beef - done this way is apparently an Australian thing (according to my butcher brother), so if you're from some backward arsed country that doesn't have this you'll have to do it the long way. 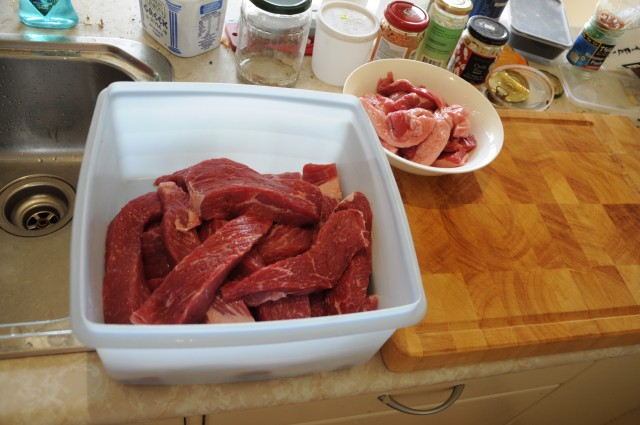 So you basically just slice it into roughty 2cm thick blocks and trim off most of the fat. It's reasonably easy to slice squarely because the brining makes it go stiffer than raw meat. I usually fry up the trimmings - its sort of like shit bacon, chewy but tasty.

So that's the hardest and messiest bit out of the way. If making it from scratch you would then brine this meat before moving to the next stage. And you have to be concerned about brine concentration or amount of salt (none of the recipes I found ever say how MUCH salt to use), and so on. I haven't found the pre-pickled meat to be completely consistent but it's always edible once completed. Sometimes it can be a bit on the salty side, but that just means you drink more beer. 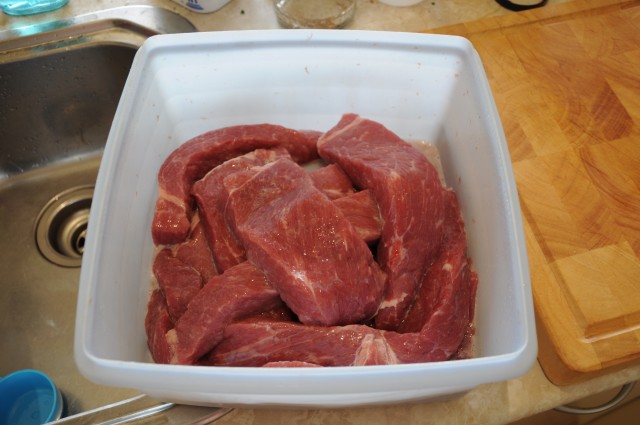 `dip the slices of brined meat in vinegar'

aka fuck that. Pour half a cup of vinegar into the container, put the lid on, and shake the shit out of it. Drain. 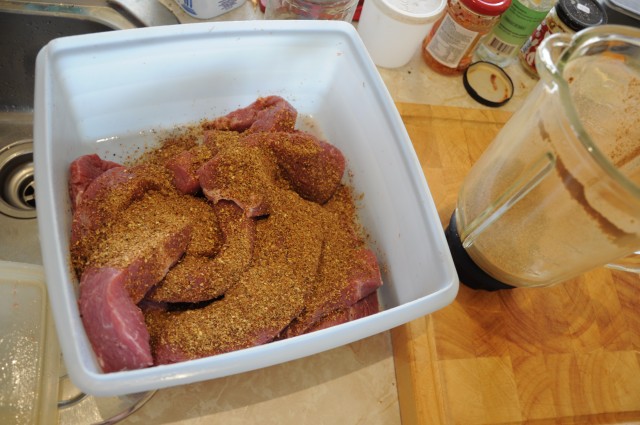 'roll in the spices to cover evenly' 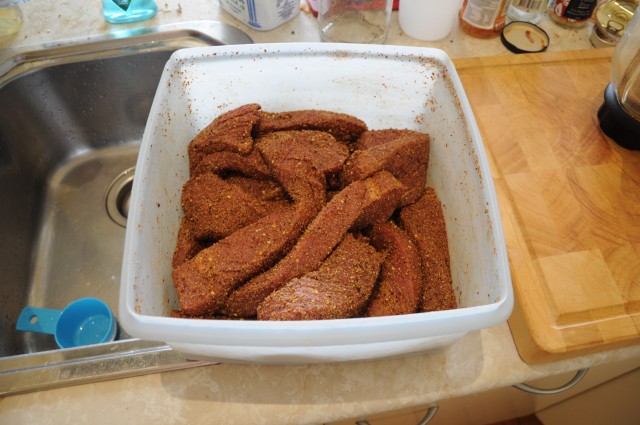 Cover, and shake the shit out of it again. Done.

I used to have a bowl of vinegar i'd dip it in, then a tray of spice to do the coating. Messy as fuck and unreliable.

Actually i'm still working on getting the ideal coating, I always seem to put too much on because when you're applying it it doesn't look like much but when it's dry it's heavily coated and falling off. Next time I do it I might also try leaving it in this state in the fridge overnight to let the flavours seep in a bit more before starting to dry. 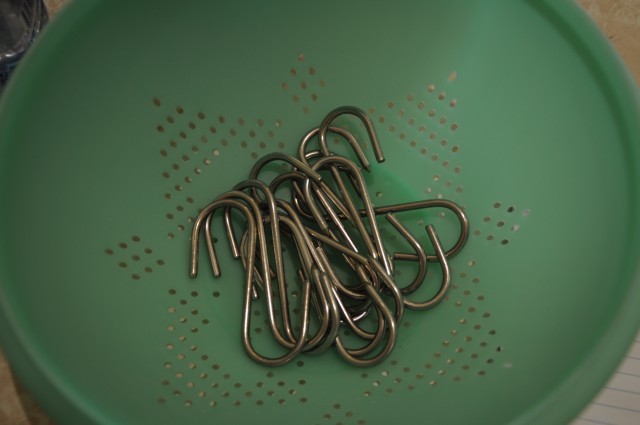 It took a while (literally years!) but i found a small local caterers shop that sold small stainelss steel butchers hooks. Previously i'd used fishing line (fucking pain to work with) then some stainelss steel wire I fashioned into hooks (which was ok until i found the proper ones). I bought out the shop at the time and got 13, which was just enough for this batch. 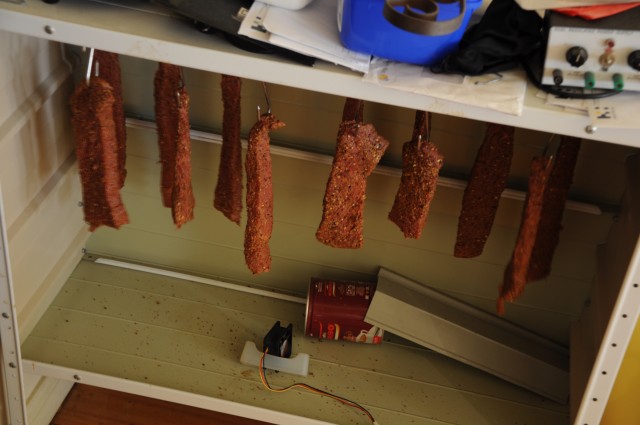 Hang them up on the hooks. I have a small cpu fan running off an old nokia charger to keep the air flowing to help speed up drying and a fly-screen to keep the bugs out. I used to have a small 20W incandescent lightglobe to help with the drying but they keep burning out and it isn't necessary in summer.

They're ready for 'picking' 1-2 weeks later depending on the weather and how thick you cut the meat. It will lose about 50% of it's original weight and be very dry and hard - you need a biltong cutter to get through it. I've tried stopping a bit earlier so it isn't so hard but the flavour is muted and it wont keep anywhere near as long.

Cut into as thin slices as you could be bothered with, consume with beer. If it's too thick it'll take a lot of chewing, if it's too thin just cutting it becomes a chore!

It lasts forever in the fridge. I made a batch just before getting gout a few years ago so didn't touch it for about a year - it was still ok when I finally got through it all.