I finally got around to mostly finishing the speakers I was making out of recovered drivers. Here's a bit of a photo-diary of the final stages. 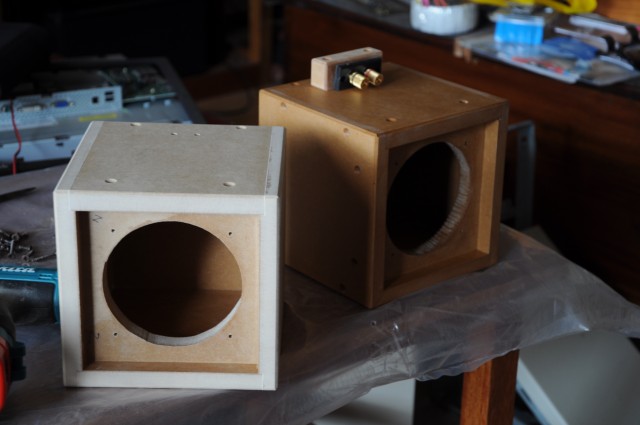 Here we have the completed woodwork. It has been glued and sanded square. I'm mostly happy with how it turned out but I could have done a bit more sanding; I was over it by then. In each case I pretty much practiced on one and got better on the other one, hence a few differences here and there. The one on the left is unpainted and the one on the right has a coat of sanding sealer and also the binding post mounting mechanism.

Three undercoats, lots of sanding and two overcoats and it's ready to be put together. 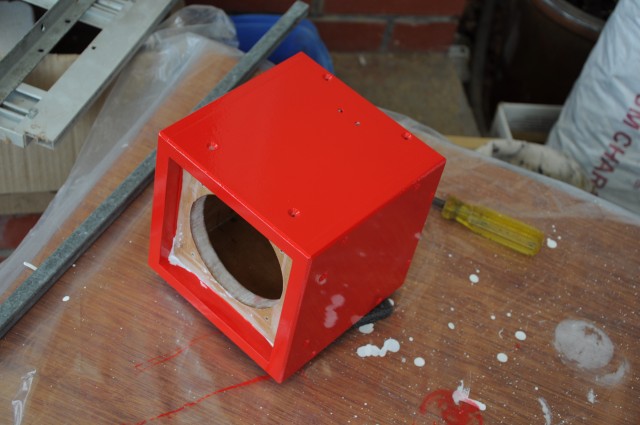 Given the paint was so expensive ($90) I did a bit of a shit job in the end; I just got sick of dealing with everything. First I had a cheap throwaway brush which I should've just thrown away before I even started. Then the paint was too thick for the weather and needed more thinning, then I tried using a small roller - but again i got some cheap junk which left behind piles of dust and shit, and because I hadn't used a roller before I didn't apply it as well as I might have.

The next shot just shows the mounting point for the binding posts. 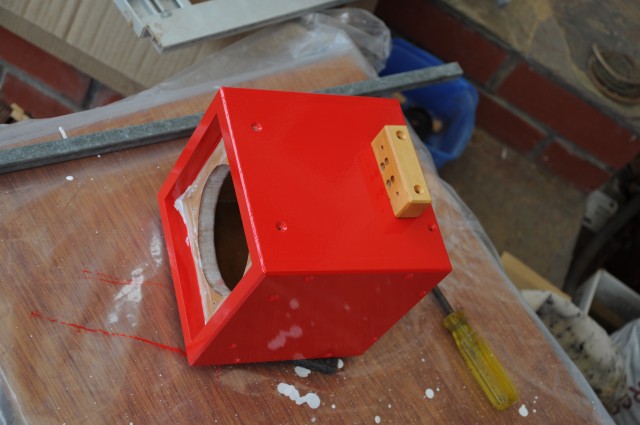 Even this I kinda fucked up. I tried using the drill press to drill the screw holes to mount it but to avoid scratching the paint I had it on a small block of foam. It moved when I wasn't looking and I drilled it in the wrong spot. It's hidden but I know it's there. 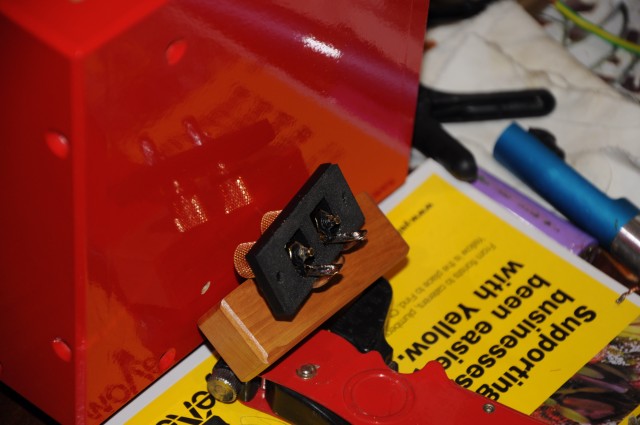 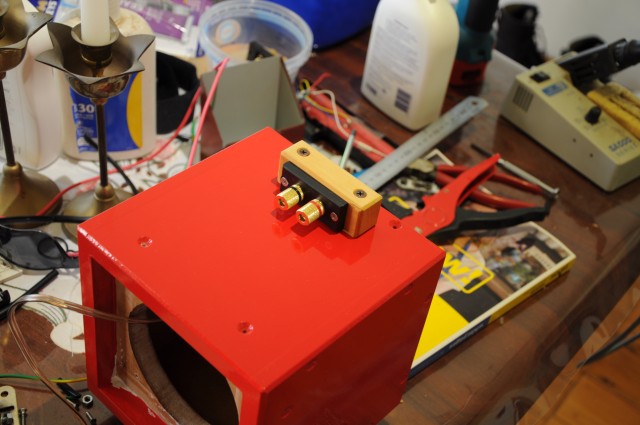 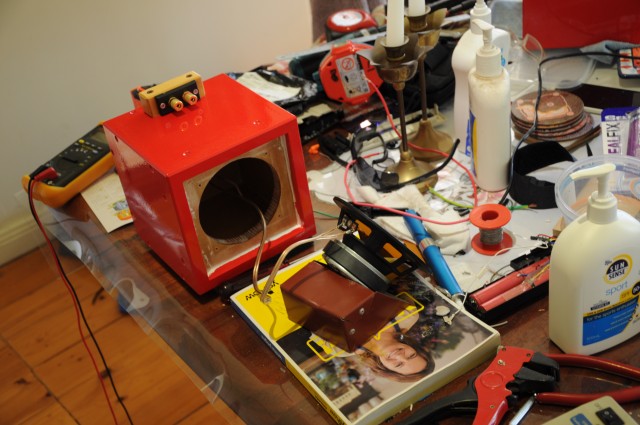 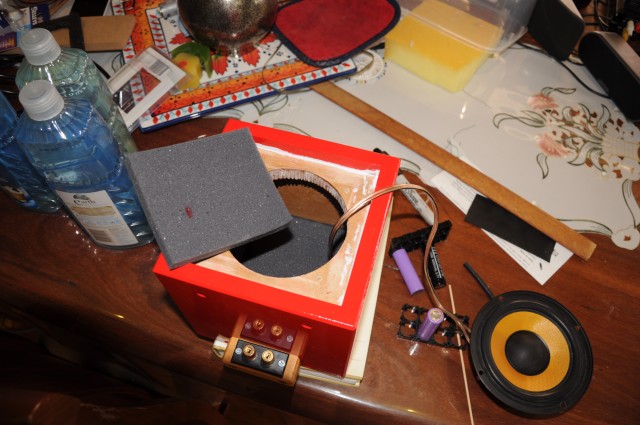 Inserting the acoustic foam. I have 25mm at the read and 12.5mm down the sides - about as much as could fit in the small box. 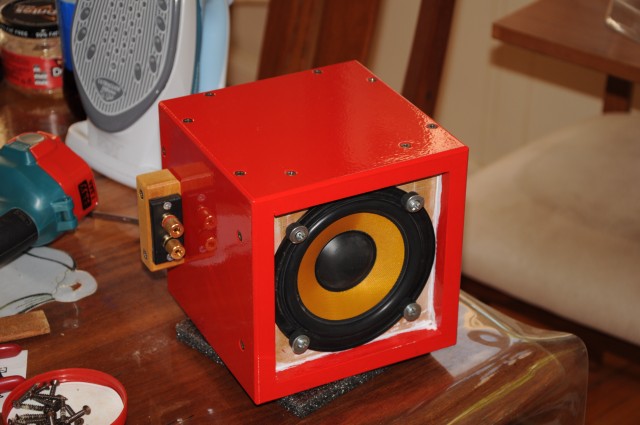 A completed speaker (so far). The screws (all 24 of them) for the box are really only aesthetic as the box is very well glued. They did help when setting the glue though. 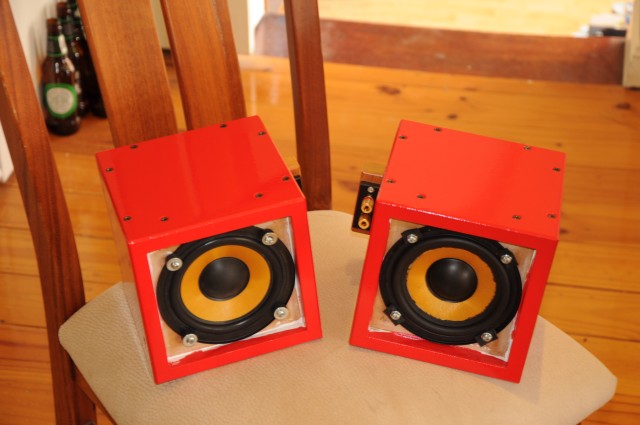 The pair. I've only redone the rubber surround on the right one so far, the one on the left is still a bit scratchy with high volume as a result. The mounting rubber washers/etc is still work in progress.

I'm still yet to get some fabric for the grilles. I did a quick peruse through lincraft but couldn't find any suitable, next time i'll ask and there's a couple of other places to try. 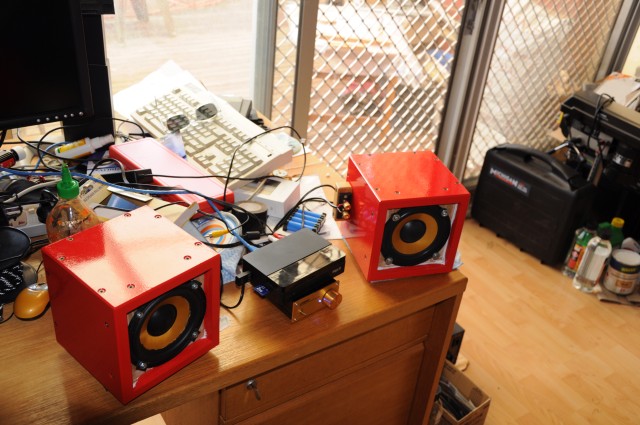 And finally a shot in testing. The plan is to put the electronics in another box with a battery pack. I've got the bits for the battery but am still working on the mechanics.

How do they sound? Well ok. They're not going to break any technical records; there's no engineering behind the boxes other than being a sealed box with a bit of foam in it. Each only has a woofer so the top-end is very retarded. The bottom end isn't too bad but it does have an echoey effect with some mid-tones, then again so do any other small speakers i've tried (including the $1000/pair units I just installed in the dining room). Quite ok for a bit of outside doof though!

It's been a good little project to get away from the screen so far, although finishing it off will not be.

I was looking around for hardware for the player but since I have the mele doing nothing I thought I may as well use that. Most of the other prototyping boards around now are either too high powered or missing some necessary bits; although the nanopi boards look quite attractive (on a side-note I can't believe how expensive raspberry pi shit is in australia). As this is nominally a 'portable' system based on recycled speakers (with no tweeters!) the audio quality isn't terribly important, the on-board dac/codec sounds good enough to me. I'm also considering an old phone or an old 7" tablet I have, although it's far less attractive to me if they can only run android (fuck that shit; yeah fuck you too google).

After spending most of a day on it I managed to get debian running on the mele. I tried the sunxi wiki and building my own kernel and bootloader but without any debug console I couldn't tell if it was working or not. I got this server image to work in the end, using the jessie image.

While trying to build using the sunxi instructions I discovered that the ubuntu maintainers have a really broken idea about what a cross-compiler should do. And they're really quite rude about it, hiding their rudeness behind the `code of conduct'.

To avoid dragging in gobs of junk and other poettering snot I built a basic SDL (1.2) and a cut-down ffmpeg (1.0) from source and have a basic console music player working. With a little more work I can control it with the mele airmouse although without a screen it's going to be difficult to do too many interesting things. Something to poke about with.