I started writing a decent post with some detail but i'll just post this plot for now. 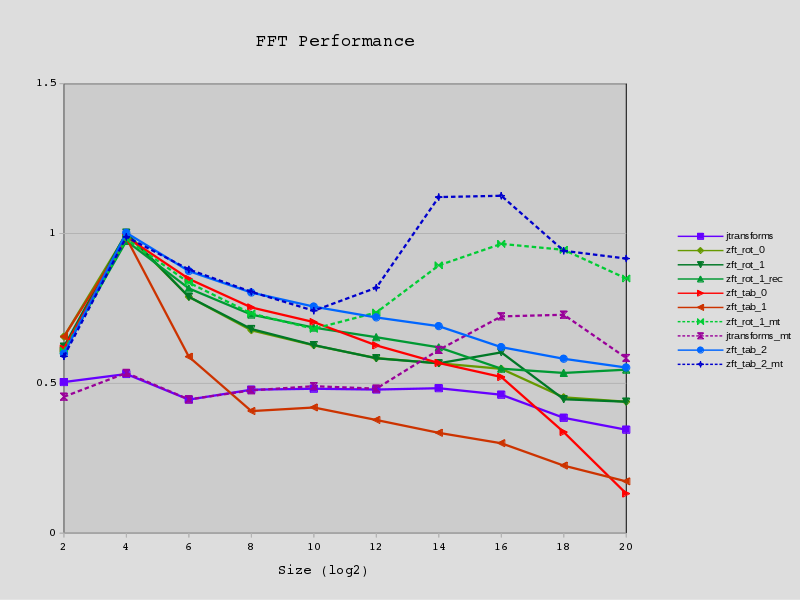 I tried to scale the performance by dividing the execution time per transform by N log2 N. I then normalised using a fudge factor so the fastest N=16 is about 1.0.

My first attempt just plotted the relative ratio to jtransforms but that wasn't very useful. It did look a whole lot better though because I used gnuplot, but this time i was lazy and just used openoffice. Pretty terrible tool though, it feels as clumsy as using microsoft junk on microsoft windows 95. Although I had enough pain getting good output from gnuplot via postscript too, but nothing a few calls to netpbm couldn't fix (albeit with it's completely pointless and useless "manual" pages which just redirect you to a web page).

Well, some more on the actual information in the picture:

So it turned out and turns out that the twiddle factors are the primary performance problem and not the data cache. At least up to N=2^20. I should have known this as this was what ffts was addressing (if i recall correctly).

Whilst a single table allows for quick lookup "on paper", in reality it quickly becomes a wildly sparse lookup which murders the data cache. Even attempting to reduce its size has little benefit and too much cost; however 'tab_1' does beat 'tab_0' at the end. While fully pre-calculating the tables looks rather poor "on paper" in practice it leads to the fastest implementation and although it uses more memory it's only about twice a simple table, and around the same size as the data it is processing.

In contrast, the semi-recursive implementation only have a relatively weak bearing on the execution time. This could be due to poor tuning of course.

The rotation implementation adds an extra 18 flops to a calculation of 34 but only has a modest impact on performance so it is presumably offset by a combination of reduced address arithmetic, fewer loads, and otherwise unused flop cycles.

The code is surprisingly simple, I think? There is one very ugly routine for the 2nd to lass pass but even that is merely mandrualic-inlining and not complicated.

Well that's forward, I suppose I have to do inverse now. It's mostly just the same in reverse so the same architecture should work. I already wrote a bunch of DIT code anyway.

And i have some 2D stuff. It runs quite a bit faster than 1D for the same number of numbers (all else being equal) - in contrast to jtransforms. It's not a small amount either, it's like 30% faster. I even tried using it to implement a 1D transform - actually got it working - but even with the same memory access pattern as the 2D code it wasn't as fast as the 1D. Big bummer for a lot of effort.

It was those bloody twiddle factors again.

Update: I just realised that i made a bit of a mistake with the way i've encoded the tables for 'tab0' which has propagated from my first early attempts at writing an fft routine.

Because i started with a simple direct sine+cosine table I just appended extra items to cover the required range when i moved from radix-2 to radix-4. But all this has meant is i have a table which is 3x longer than it needs to be for W^1 and that W^2 and W^3 are sparsely located through it. So apart from adding complexity to the address calculation it leads to poor locality of reference in the inner loop.

It still drops off quite a bit after 2^16 though to just under jtransforms at 2^20.