Been playing a bit with simplex noise. Interesting how much you can create from the same basic function and kind of cathartic and easy on the brain.

The following were all created with the same basic noise. 4 frequencies are combined in different ways. I'm using Z as an animator so they all smoothly animate. 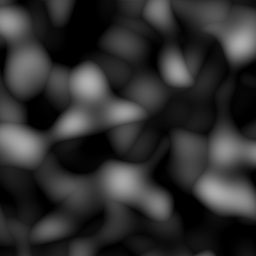 Blobs of liquid. This uses max(). The frequency is the same for each layer by the amplitude is altered. Note that this is purely 2D and the depth appears due to attenuation.

Smoke or writhing organic mass. This uses max(abs()) and a lower frequency. 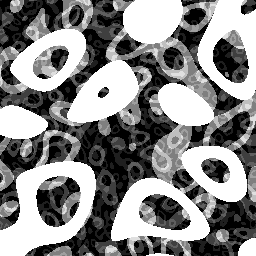 Lava lamp ringlets. Scales to an integer and selects one of the bits from the integer. Again the depth is from attenuation and scaling in this case. 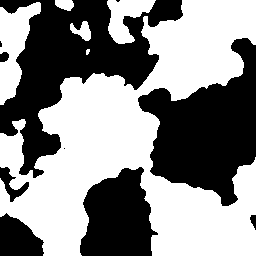 Friesian cow-hide. Or a coastline. Or a burning piece of paper. Threshold with multiple frequencies. Works very nicely as a blending mask for image transition.

I've mostly been playing with the hash function to try and create something epiphany efficient whilst still working sufficiently well. For 3D noise the current candidate uses 3 lookup tables to provide a basic hash of the x/y/z locations and they are combined using floating point multiplies and/or other bit ops. I'm only using random values which works most of the time although a better choice should be possible. It may be worth just going back to the permutation array of the original code as I realised I can implement that in only 256 bytes if i need to. I still don't know how it will run on the machine as the simplex setup code is pretty expensive too but I haven't looked at how to optimise it yet. Originally I was looking at the 2D noise because it was simpler but as 3D noise is just so much more useful I will target that instead.

I also created a 16-element spherical set of vectors for the base noise gradients. First I used an inscribed cube and some others I made up but then I finally found the code by Jon Leech (hint: it's at the bottom of the page!) which models electron repulsion to try to evenly space the points across the sphere. This does create a nicer result. 16 is used since it's a lot easier to calculate the modulus of 16 than it is for 12.

I do see patterns showing up particularly with the ringlet algorithm - lines at 45 degrees showing up as you zoom out - but this shows up for the original too. The noise is definitely not zero-mean. If I average over many frames I get fairly regular blobs at 45 degrees showing up also - although they are at 90 degrees to the ones that show up zoomed out, but again this is also present with the original Simplex noise hash function and gradient set.