So I finally got off my arse and made it to the beach on a week-day today. 1/2 hour easy ride (it's 41 today, too hot to rush) although I left it a bit late and caught some of the after-school traffic on the way home. Water was clear and cool and there more people down there than I would have expected - not that any went into water deeper than their chest and some people were sun-baking (the sun is so friggan hot wtf would you want to sit right out in it for? In it??). Saw a couple of dolphins swim past slowly about 40m further out.

Anyway 1/2 hour ride home is enough to get pretty warm so I went for a cool drink (reehydration before I start on some beer) and I only had an experimental bottle of lime cordial I made last time - I dropped half a large ripe red habanero chilli into the bottle when I sealed it. I wasn't sure if it would really be what I was after. 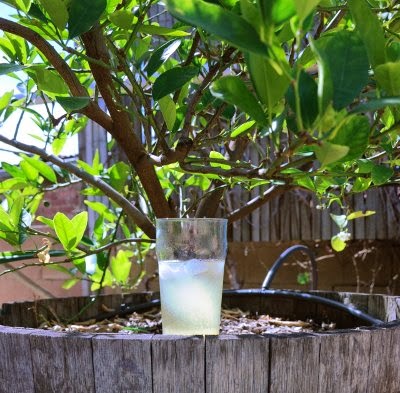 As you're drinking it it is a typical cool refreshing tangy lime flavoured drink. And then you stop. Your mouth, lips, and throat instantly starts to gently and delicately burn.

So it makes you want to have more ...

Which makes you want even more.

Wow I said. Definitely something I'll do again next time I get some limes.

And as with most habanero based heat the burning just keeps increasing the more you have, I guess the capsaicin must get stuck in your soft-tissues for a long time. I know after cutting a lot up i've had burning fingers for a few days despite aggressive soapy scrubbing - your fingertips burn quite notably (to the point of pain) when you press your fingers together and the harder you press the hotter they feel. And it hasn't affected the flavour as sometimes chillies add a capsicum note although habaneros have thier unique sweet flavour so it is probably just complementing the sugar.