I thought i'd see how well the detector works on more general data so first I cleaned up the data a bit and ran against a test image. I cleaned out some closed eyes and excessive squint, mis-alignment, and fiddled a bit with the ratio of eye-size to region. I ended up going with a 20x20 region because adding a bit more height to the classifier seems to help with nose and mouth false-positives. I synthesised a number of rotated images but kept the scale fixed, and included both left and right eyes in the positive training set.

In short, I trained a classifier for open and straight-on eyes only, with a small amount of head tilt (+- 15 degrees) and only misalignment variation to the scale. No spectacles. 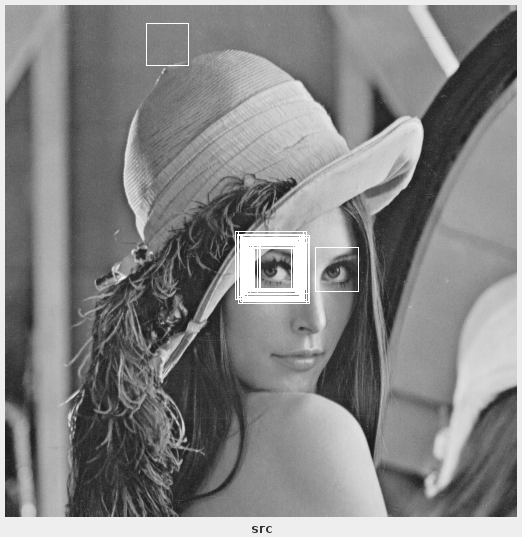 This is the raw results after running the detector over 19 scales from 0.2 to 0.5 of the original Lenna image. The scale range isn't chosen arbitrarily obviously. Whilst the threshold can be adjusted to remove the false positive I left it in to demonstrate some remaining issues. Although blank areas aren't that big of a problem as they can be detected via other means such as variance.

This was the single highest response from all scales tested. The heat map is rendering exp(score), and the result is normalised to highlight the peaks more clearly. The signal being processed is the local binary pattern (LBP) image in the centre, which is a 4-bit CS-LBP 8,1 operator with pixel centered sampling.

As can be seen, It's very good at picking out Lenna's right eye ... her left eye is a bit obscured and off-angle and generally gives the detectors i've tried a bit of grief. It doesn't work well with outside images due to squint, or portraits against a blank background (blank areas score well). But given all of the negative training data come from only face images, it's working quite well as suppressing non-eyes. It has some problems with scale - once the face is about 2x the size the detector expects it starts to pick up eyebrows/noses/mouths/under-eyes but again given the training data this is to be expected - and generally the eye detector is only run after you have face candidates.

This is just with a single 8-feature (4x4) classifier which processes a 20x20 region. I had intended to create a multi-stage classifier but I got side-tracked. 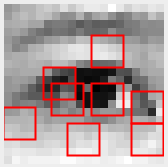 This is the regions used by the classifier created in this example, overlayed with one of the positive training images. The data comes from Color FERET. Any significant overlap is essentially wasted processing (apart from a weighting factor of the overlapped region), so in this case the ga may not have chosen the best solution. It may be worth investigating whether I can get better results by pre-locking the regions and just letting the genetic algorithm choose the other classifier parameters instead.

It took a few runs of the classifier to get a this good result - although the ROC curve fitness measure works well, each run tends to 'lock on' to specific feature points and so that limits the performance to a local peak. If a random bit-flip hits the coordinates it just creates a poorer classifier and it dies immediately.

Some earlier trials had greater problems with background but this particular one was looking very good after about 1K generations so I just kept letting it run for much longer to see if it would get better - it did slightly and the first individual reached 'perfection' on the training set after about 55K generations (around 40 minutes, 8K of each class). Although that wasn't necessarily the best classifier in practice.