So seems like a good time for another update - the last 50K certainly happened a lot faster than the first.

It bumbled along till about this time of the year in 2011 and then bumbled along at a higher level ever since. The big leap was from being added to the JavaFX feed surreptitiously IIRC, and it's been propped up lately from the occasional twat from the parallella devs.

I'm pretty sure a good proportion of it is just search engines and web crawlers, and lately a sharp rise in link spammers. I'm not sure why as the number of pages grows the page hits don't. Maybe it's because of these automaton views, or just because the web itself grows at a similar rate. I'm still occasionally dissapointed to see my blog show up too near the front when I try to whittle down a search on a topic (i.e. am i the only person in the whole world looking at that problem?), although that hasn't happened much lately.

I don't have the data to show it (maybe i can get it off analytics, but that doesn't cover the whole range and i'm not that narcissistic), but the general ebb and flow i've seen over a week suggests most human readers are reading the blog during the work-week and not on the weekends. Which is a bit of a bummer since almost the whole blog is about a hobby. If i were to guess: students appropriating work as their own, programmers looking for free code, and probably a good bit of general skiving.

Just looking into some of the stats is a bit weird to be honest. The operating system skew for instance. I absolutely detest Apple Macintosh computers, yet that seems to have led to a pretty significant proportion. I think there might be some scientific Java and OpenCL programmers lending their weight to that stat. Good to see a decent 17% or so on some sort of Unix at least.

The browser share is also likewise atypical of the internet as a whole. Although personally I don't find the appeal of Google Chrome - not that Mozilla Firefox isn't without it's considerable problems mind you. Poor little IE, sucked in you pile of shit.

Because the search terms list has such a long tail it's hard to really tell what is bringing people here - but "java fft" continues to be the clear leader. The second is no doubt just an automatic browser resolving an invalid url (hint: url's start with the protocol ...), and kobo seems popular (is, below). Nice to see at least one other type of open sauce made the list too. Unfortunately spikes in the stats tend to hang around forever. 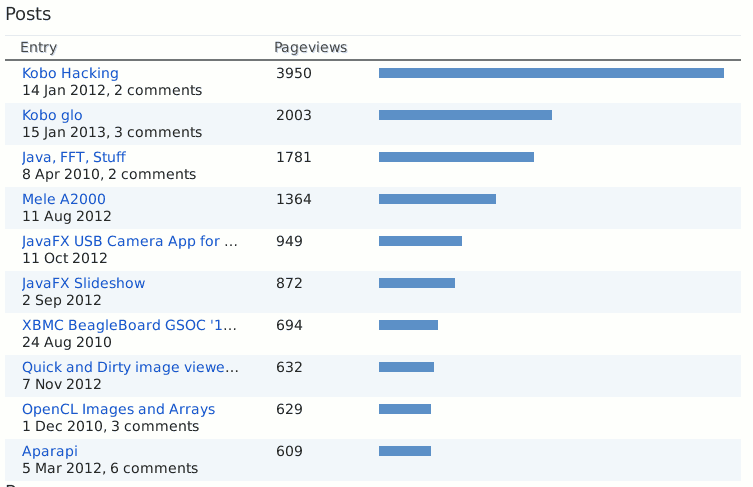 All I can think of is that there's a lot of people with kobo's that don't want adverts or to pay for books. Which is an attitude i can fully agree with, they just wont get anything to help them with that here. The OpenCL post in there is also not particularly useful, but who can tell what people find interesting.

I think the main reason I continue to blog is simply for the cartharsis of it. I don't care if people think i'm a bit nutty, a total cunt and a boorish prick, or if i'm really just talking to a wall. I'm not terribly interested in using this format for holding a conversation with peers and even less so with freeloaders; which is just as well as I haven't had much of that - I just got my 200th comment this minute infact.

Well, on to the future I guess.

Tagged biographical.
PicFX out | lambdas to the slaughter ...
Copyright (C) 2019 Michael Zucchi, All Rights Reserved. Powered by gcc & me!