I haven't been working on this nearly as regularly as I should've been but here's a bit of an update on the demo android app I was doing for ffts (an fft library).

It was looking a bit bare so I added in the effects I came up with on the weekend. This pretty much forced me to revamp the whole backend again ... but after a few hours work it's all roses. Or tomatoes. 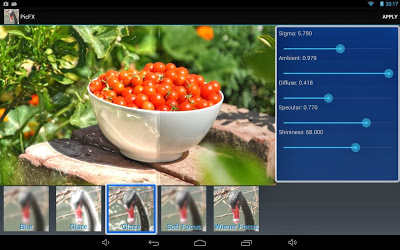 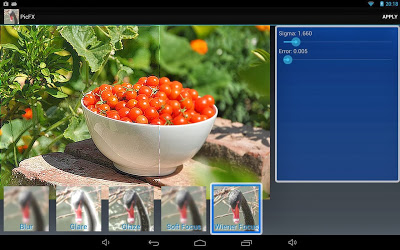 Because I was aiming for some performance the code isn't the best 'example' code, but what can you do eh. Some of the design made code re-use difficult so there's a bit of copy/paste. Even with straight C the interactive performance is very good - over 10fps during a basic convolution of 4 channels. Of course it's only updating a 512x512 tile to help with this interactive speed, but i'm using multiple threads for most of the work. I took the NEON code out for now so there's a little more to be gained although most of the time is spent within the fourier transforms.

Today I added a bit of branding and cleaned up the GUI a bit and so (finally!) it's almost to a releasable state.