I hooked up the video generator to the jjjay interface last night and did some playing around on a phone form factor.

The video reading and composing was pretty slow, so I separated them into other threads and have them prepare frames in advance. With those changes frames are generally ready in Bitmap form before they're needed, and 80% of the main thread is occupied with the output codec. This allowed me to implement a better frame selection scheme that would let me implement some simple frame interpolation for timebase correction. The frame consumer keeps track of two frames at once, each bracketing the current timestamp. Currently it then chooses the lower-but-in-range one. The frame producer just spits out frames into a blocking queue from another thread - before I had some nasty pull logic and nearby-frame cache, but that is the kind of dumb design decision one makes in design-as-you-go prototype code written at some funny hour of the night.

I guess to be practical at higher resolutions hardware encoding will be necessary, but at SD resolution it isn't too bad. VGA @ 25fps encodes around 1-2x realtime on a quad-core phone, depending mostly on the source material. I think that's liveable. 1280x720 x264 at 1Mb/s was about 1/4 realtime. I suppose I should investigate adding libx264 to the build too.

I cleaned up some of the frame copying and so on by copying the AVFrame directly to a Bitmap, it still needs to use some pretty slow software YUV conversion but that's an issue for another day. Memory use exploded once I started decoding frames in other threads which was puzzling because it should've been an improvement from the previous iteration where all codecs were opened for all clips in the whole scene. But maybe I just didn't look at the numbers. I guess when you do the sums 5x HDxRGBA frames adds up pretty quick, so I reduced the buffering.

It was fun to finally get some output from the full interface, and as mentioned in the last post helps expose the usability issues. I had to play a bit with the interface to make the phone fit better, but i'm still not particularly happy with the sequence editor - it's just hard fitting enough information on the screen at a reasonable size in a usable manner. I changed the database schema so that clips are global rather than per project, and create and store clip/video icons along with the data.

So with a bit more consolidation to add a couple of essential features it'll approach an alpha state. Things like the rendering need to be moved to a service as well. And work out the build ... ugh.

At least I have worked out a (slightly hacked up) way to use jjmpeg from another Android project without too much pain. It involves some copying of files but softlinks would probably work too (jjmpeg only builds on a GNU system so I don't think that's a big problem). Essentially jjmpeg-core.jar is copied to the libs directory and libjjmpegNNN.so is referenced as a pre-build library in the projects own jni/Android.mk. If I created an android library project for jjmpeg-core this could mostly be automatic (apart from the make inside jni).

Incidentally as part of this I've used the on-phone camera to take some test shots - really pretty disappointed with the quality. Phone's still have a long way to go in that department. I can forgive a 100$ chinese tablet and it's front-facing camera for worn-out-VHS quality, but a 800$ phone? Using adb logcat on this 'updated, western phone' is also very frustrating - it's full of debug spew from the system and bundled software which makes it hard to filter out the useful stuff - cyanogen on the tablet is far quieter.

Rounding to the nearest day jjjay is about 5 days work so far.

On an unrelated note, I was working on updating a bitmap from an algorithm in a background thread, and this caused lots of crashes. Given it's 3KLOC of C+Assembly one generally suspects the C ... But it turned out just to be the greyscale to rgba conversion code which I just hacked up in Java for prototype purposes.

Android seems to do OpenGL stuff when you try to load the pixels on an attached Bitmap, and when done from another thread in Java, things get screwed up.

However ... it only seems to care if you do it from Java.

By changing the code to update the Bitmap from the JNI code - which involves a/an locking/unlocking step it all seems good.

Of course as a side-effect simply moving the greyscale to RGBA conversion to a C loop made it run about 10x faster too. Dalvik pretty much sucks for performance.

Update: Well add a couple more hours to the development. I just moved the rendering task to a Service, which was overall easier than I remembered dealing with Services last time. I guess it helps when you have your own code to look at and maybe after doing it enough times you learn what is unnecessary fluff. Took me too long to get the Intent-on-finished working (you can play the result video), I wasn't writing the file to a public location. 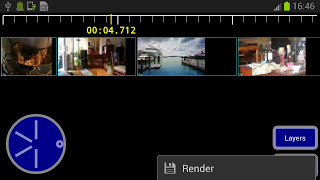 I cleaned up the interface a bit and moved "render" to a menu item - it's not something you want to press accidentally. 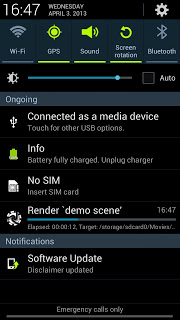 So yeah it does the rendering in a service, one job at a time via a thread pool, provides a notification thing with a progress bar, and once it's finished you can click on it to play the video. You know, all the mod-cons we've come to expect.