Had a little hacking session this morning and implemented "tall tiles" into the client. The server doesn't need to know about them although I had to write a converter for Tiled format for the test map I generated.

Tall tiles allow for a great deal more flexibility in design for oblique or isometric projected maps without complicating any of the game logic. Well, ... it seems a pretty obvious feature for anything but a top-down game. 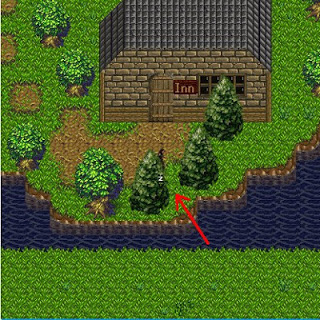 If one looks closely one can see the partially obscured player sprite. Even things like the tree in-front of the path/building/or other trees is completely impossible with the original Dusk engine - without creating separate tiles for every possible background.

As I need to store multiple images and so on I decided to store them in a jar file, with a manifest describing some meta-data about the files therein. In tiled I create a separate set of tiles for each tile size, and the converter creates one packed image for each tile set and stores it in the jar. I intend to use the same mechanism (and jar) for player and mob sprites too, allowing a lot more flexibility there as well, and possible even use tiled to manage those too (allowing for example symbolic names for sprites rather than using numbers which are hard to keep synchronised).

Rendering is straight forward from top to bottom and I render the map then the player. I put all the player labels and highlights above everything else because well it just seemed like the right thing to do.

I decided to change the way tile actions are defined. Rather than have a separate script for each tile by number, I instead have a property file (why write my own parser, again) which defines which script is executed for each tile that needs one. By default tiles cannot be walked or seen through so values only need to be set for open tiles. This makes it a lot easier to manage, and I will probably hard-code some constants like "true" as well. I'm using Tiled to set the properties on the tiles which define which scripts are run, and the converter dumps these to a file the server understands.

Actually last night I also started working on a binary protocol for the server. I did the map update and a couple of others. But then I kind of got hung up on trying to encode some of the more detailed messages and just wasn't feeling the love. Probably a more re-usable approach using simpler "property lists" might be more loveable.

Some licensing queries I have should be sorted soon, and then i'll put the code somewhere once I've fixed up the files.

Anyway i'm pretty pleased with my progress this week (considering i've never worked on any game code ever before), and this little 'win' is probably a good opportunity to take a break, before I get overly keen and try to tackle multiple maps or layers and sink my last weekend of leave down the toilet!