Did a bit more refactoring and bug fixing this morning in the server. Removed a bunch of Vector types, and improved the code a bit. Found and fixed a concurrency bug.

One is tooling - the bundled editor isn't too good, and there is already a java-based editor for tile maps called Tiled (although it's moved to C++ now - ugh - the original still works ok and doesn't need a pile of dependencies installed). So I had a bit of a play with jaxb and jxc and created an exporter for the current map format to Tiled's native format. 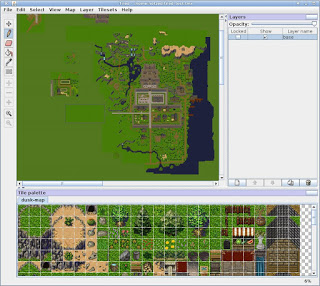 It works ok although bogs down (on this laptop) at this sort of scale - the map is pretty big.

Writing an exporter isn't much more work, although since i've gone this far i'm starting to think of other ideas to include at same time ...

Taller tiles
Taller tile images which sit on the same base square allow for things like trees and forests and posts you can walk behind. i.e. pretty useful for a designer.

I think this should be pretty easy to implement as a first cut, the rendering code only needs to align based on the height of the tiles, and the image storage needs fiddling with. A slight further complication is to avoid pop-in, but the server can send more of the map than is shown.

Taller sprites
This again is fairly simple and solving the problems for the tiles should help solving it for the sprites.
Multiple maps
I think that huge map is pretty unwieldy, 'rooms' are just defined as teleports to other closed sections of the map, and obviously that doesn't scale particularly well. Obvious solution is to have a separate map just big enough for each 'scene', and add the map id as a move/teleport argument. I think this loosely connected graph of separate regions has a more 'muddish' feel to it too.

I think that most of the game logic doesn't really need to change, as most entities will be tied to a given map so it doesn't need to turn into a 3d problem.

Layers
Another idea is to have multiple layers of rendering as a mostly cosmetic feature. I initially thought this would be pretty easy but to do it well will require some extra meta-data.

To keep the problem in two dimensions the entities will either have to be locked to one visual layer which might be a bit limiting, or some extra meta-data provides that information. e.g. a non-visible plane which indicates which layer objects are rendered on. Currently there can be behaviour attached to a type of tile that you're standing on and although this layer-indicator system would also work with that it might be useful to have a separate plane which defines the behaviour - although that is more design work.

But it could certainly be interesting, and allow for some interesting effects like parallax.

Binary protocol
Currently the protocol is a mix of binary (char) and strings. Actually it's a bit of a mis-mash of mis-match - each end is writing to a DataOutputStream, and each end is reading from a StreamReader. Although it works it isn't really supposed to, and having a DataInputStream on the other end would allow binary interactions.

Initially the layer stuff sounded good but the more I thought about it I wasn't so sure. I played with some taller tree tiles in Tiled and I thought it looked pretty nice. For an angled-down view just using a taller image gets you much of what you might want layers for without the extra overhead.