``I'll just fix up a few little things'' turned into ``Another full-day of hacking'' on my fork of Dusk.

I finally managed to de-awt everything. Well there are a couple of missing features (text viewer/editor), but the last major window to convert is in: 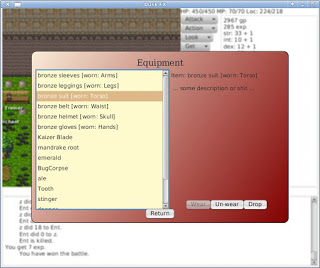 To make this a bit nicer I think I need to modify the protocol so the server tells me more about the items such as item counts as it does with the inventory command. And there are other possibilities such as graphics, and "detailed description". It should probably also split up equipment and general inventory in some way or another ...

Well at least the layout didn't take any time today even if it looks it.

What took all the time was rewriting another big chunk of the client code map tracking and abstracting away the user interface from the client logic.

For the map code I again abstracted it into a separate structure and provided accessors and indices of various things, although now i'm reflecting on it I don't think some of the stuff I coded is even used since the algorithms that used them are gone. For example there was code to find entities by name - but internally i'm just using unique ids now so having an index by name it isn't required anymore. One major change I did was to just keep track of entities (players, mobs etc) using absolute coordinates rather than trying to keep them forever up-to-date with the current viewing window. Apart from being a great deal easier to use it is obviously more efficient. There were a lot of "x - offset1 + offset2" type things everywhere anything was accessed, and instead I just made the map to be relative to the top-left corner rather than the centre, and track the player location separately.

I also changed entity based actions to use id numbers instead of indexed names. Basically if there is more than one object of a given type on the screen then some messy code gives each one a unique number. The problem is the client and server do this independently, and I couldn't be stuffed finding out how it works - one of the benefits of the map abstraction was killing a pile of ugly code, and it was buggy anyway. Since the server and client already uses unique id's for everything I just added support in the server for doing targeted actions based on id instead. The client can always do the lookup if the command line needs to support it, and I guess I can now clean up that mess in the server too.

And finally the entire user interface and system interaction is hidden behind a re-usable interface, for the obvious sub-java/sub-gnu operating system option.

So far the de-awting seems to have made is more stable too. Although I also fixed some thread issues in the client as the game runs on a separate thread to JavaFX.