I'm not sure exactly how I came across it but I found a blog DuskRPG about an old Java graphical MUD called Dusk with some source on the net.

The start of this week was hot and idle so I spent a lot of time just reading shit on the web. I should be back to work soon so I thought i'd "do nothing" for a bit. One thing I noticed was that the liberated pixel cup finally got judged - and the games look a lot better than when I first looked at it some time ago.

It looked interesting so i've contacted the blog author and also had a poke at porting it to JavaFX. 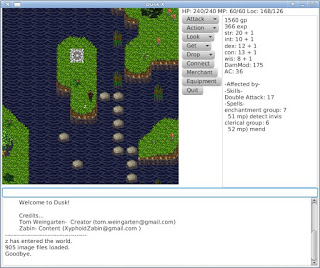 So a few hours down I have enough to play it with the main window running as JavaFX code, although the other popup windows are still pretty nasty wrongly-threaded awt.

Not really sure how far i'll get but i'll see how it goes. I have a few ideas I want to try to "modernise" the gui and take advantage of features in JavaFX although some of these will involve delving into the server code too.

I have a habit of going nowhere with game code, but at least this time it's already done ...