I've been meaning to make a meat drier for a while and I decided not to hang around now i'm on holiday and spent a couple of days putting together a drying cabinet, and then making some content to put into it. 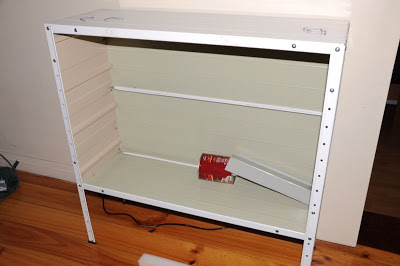 I had some cheap shitty old all-steel screw together shelving unit that I hadn't unpacked since I moved from Perth, and I figured that was about the right size to at least get some parts out of. I originally intended for it to stand upright with the shelving standing up length-wise, but after I got it screwed together I realised I could just flip it on it's side and it also had legs ... which solved one of the problems I had wrt mounting any additional hardware ... 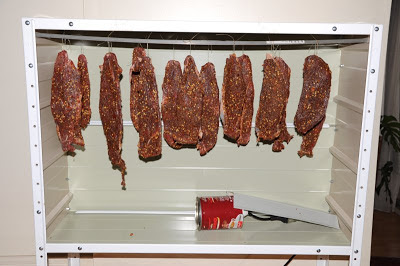 I'm just using a 40w globe for heat/airflow for now, and I'll see how that goes. After a few hot and humid weeks we're back to cool and dry which should be fine.

I also had a fly-screen lying around not doing anything, and by complete chance it happened to fit the width exactly. For now I made a very simple wire clip to hold it in place and have the foam to prop it up a little to make it cover the top. 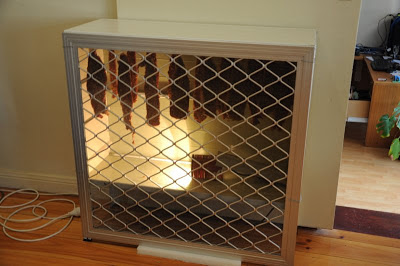 The only metal I had to cut were the sides and the length of the rails. The sides were off-cuts from the shed, and I only had to cut about 50mm off those. And I had to drill a few holes where the existing ones didn't align. The only other fabrication was to pound down the wider inner seam under the shelving so the 4 panels fit together snugly - a 6" piece of railway line and a hammer did the job. Oh, and bend a few bits of thick wire for the clips and an off-cut for the drip cover.

I already had the coffee-tin bulb holder from previous efforts, and the profile of the steel on the sides provides a ledge for the rails at several heights.

For the biltong, I just did the main muscle in a whole rump (which is the cheapest bulk meat I have handy), which leaves plenty of drying space, although if I used wire hooks it would hang sideways and let me fit more in.

Now hopefully it comes out ok ... I've made it before using a cardboard box, but it's been a while and although the details don't seem to matter much, sometimes they do.