First things first, this is not about using the android api to detect a face, it's about some code i've been experimenting with over the last few months.

I decided to just upload the skeleton demo application i've been using for testing the detector on Android. It might give me the impetus to spend some more time on it.

I've put the package on google code in the MediaZ project as DetectNEON-0.apk (for want of somewhere better to put it). Note that there is no public source for it at the moment.

Update: I was a bit too lazy and only implemented code for a front-facing camera. I just uploaded another package DetectNEON-1.apk which might fix it, or just break it for everything. 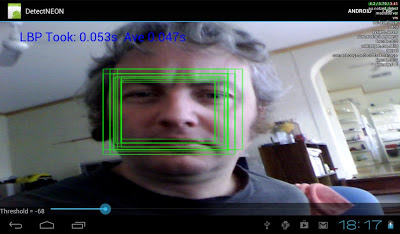 The app has an inconveniently placed slider that lets one adjust the matching threshold, which may be required under different lighting conditions or due to the qualities of the camera sensor. One can also switch between android's 'built in' face detector and mine with the buttons at the top. The aspect ratio of the video display is broken, but that isn't what i was trying to test here. It is also obviously only displaying the raw hits and not grouping them in any way.

On my ainol elf 2 tablet the detector takes around 45ms on a 640x480 input frame using the settings i've set: minimum object size detected is 51x51 pixels, up to about 400x400. The code is single-threaded and I was using 'normal' mode for the CPU scheduler.

For comparison the Android face detector API takes about 500-600ms, although it does search to a smaller size - which is a critical factor in execution time for sliding window algorithms.

It seems to work better than I remembered, but I think last time i tested it was late at night in a poorly lit room.

Update 2: Just a bit more info that is scattered over the blog.