Well I thought of something relatively simple I can do with JavaFX to get familiar with it, and maybe even end up with a useful tool. And that is a Linux web-camera application - i.e. something like Cheese.

I've been playing with the idea for a week or so but haven't felt like hacking much for various reasons. Last night was a wild storm, and the wind, rain and hail, together with the neighbours broken gutter and hayfever, it kept me up much of the night. I thought rather than struggle painfully with work i'd struggle painfully with some of my own hacking instead ...

A few hours poking around later ... 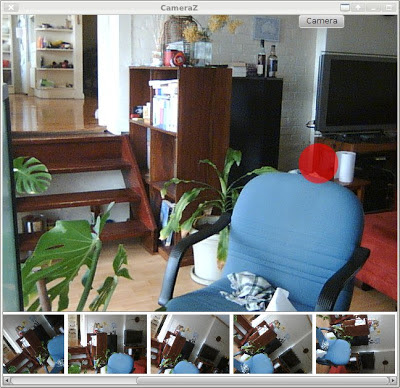 The red button takes a picture, although it just stays in memory at the moment. Then including the dynamically generated camera controls ... 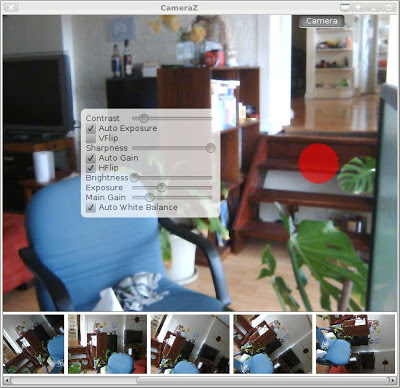 Along the way I found a bug in v4l4j which was fixed very promptly - thanks Gilles.

It will let me tie in the jjmpeg code as well, if I get that far. And maybe even socles for some OpenCL processing (might get me off my arse to fix the socles filter graph stuff). Right now it doesn't do much, but on the other hand it's an almost embarassingly small amount of code too.

So as usual - the layouts are the bane of any GUI developer. I'm using a GridPane as the base element for the on-screen controls, but it just isn't cooperating completely. e.g. the cells aren't aligning the way i tell them to - not unless I create a single-cell GridPane and align that. I guess i'm missing something, but that's all part of the learning curve no doubt.

Performance is a good bit better than swing - a simple 60Hz webcam view is chugging along at about 35% cpu in Swing (the v4l4j bundled demo), whereas JavaFX is sitting around 10%. Although it goes up fairly quickly once you add blended widget overlays.

The overlays are a lot easier to code too, as are any animations and 'flashy shit', of course.

e.g. Half an hour later and I added some animation, taking a photo has it jump down to the list below, and it then fades in.

Although JavaFX has some "FX" which can be applied to scene graph nodes, i'm not sure it will be useful here. Apart from being a bit limited, the 'pulse' and asynchronous nature of the way the result can be grabbed to the host probably means it can't be used for video processing. One can have 'off-screen' scenes I believe, although i'm not sure exactly how the timing stuff is then handled.

Actually it's a task well suited to OpenCL, so if and when I get there, i'll probably just use that. It's a pity that JavaFX wont talk to OpenCL directly and the data will have to do a round-the-world trip across the PCI bus, but at webcam resolutions it shouldn't be a big issue.

As far as a 'camera app' goes, i'm personally more interested in other types of features anyway - e.g. automatic candid shooting (such as avoiding closed eyes or turned heads) for a party, or various types of image enhancement or degradation that can't be expressed using the current JavaFX effects tree.

Another hour of hacking ... I added video recording to it via jjmpeg. I'm using mjpeg at the moment which seems to be about the only decent 'working format' I can find (fast to encode, easy to seek, commonly readable, etc). I threw everything on another thread so it easily starts recording without a glitch (at least on the workstation). It's using about 60% cpu (of 1 core) in total on this machine to capture VGA @ 60fps (although i really need to try it on a slower machine).

If only sound was that easy ...

My thinking would be that videos are recorded using a format suitable for recording (a fixed known format, high quality, low overhead, easy to manipulate), and can then be exported to another later (e.g. using ffmpeg command line).

Actually on jjmpeg, I guess I should revisit it now FFmpeg has released 1.0, maybe the api will be stable for a while. It's on the TODO list ...

I haven't checked anything in yet but it'll probably end up in mediaz/fxperiments/CamZ eventually.

Update: So I added a separate record button and flashing text and just checked it in as is, warts and all. I put it in MediaZ as a "top level" sub-project rather than inside fxperiments. Last weekend I updated jjmpeg to FFmpeg 1.0, so I changed it to use that (and found a lot of bugs along the way).