This was one of the first JavaFX things I played with - I was just hoooking up a web camera, but since that isn't too much on it's own I added a bit of code I'd been playing with at the time. An object detector.

It only works on systems with a Linux kernel. 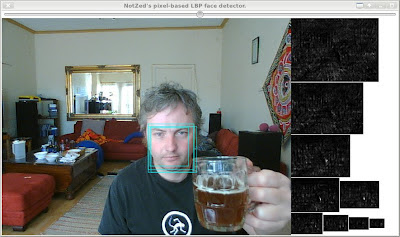 Using pretty simple single-threaded Java code on the 640x480 input including generating the heat-maps, totals about 55ms per frame on my workstation. But the algorithm is parallelisable[sic] right down to the SIMD level, and because it's so simple it isn't even hard to do.

I'm not going to go into the training algorithm I'm using at the moment, but suffice to say it's very simple and very fast. Even though it's so brain-dead thick it still shows some promise - but still needs more work.