This is a simple to use and free software app for android for playing the 'Freezone' radio stations from Internode, an ISP based in South Australia.

The player is based on the RandomMusicPlayer example from the Android SDK with an added frontend for listing the FreeZone channels. It keeps playing in the background and should use hardware decoding for low battery use.

The list of channels is loaded directly from Internode, so it is always up to date and includes channel artwork where available.

Requires android 4.something or other. The only permissions required are INTERNET and WAKE_LOCK. The INTERNET premission is only used to access Internode servers in order to retrieve the station list, icons, and play the streams.

This program is free software: you can redistribute it and/or modify it under the terms of the GNU General Public License as published by the Free Software Foundation, either version 3 of the License, or (at your option) any later version. See COPYING and README in the source code.

I have no affiliation with Internode other than being a customer.

This app contains no advertising.

Since writing this application a lot has changed in the local isp marketplace and Internode was sold off to a larger isp. The new one is a cheapskate and hasn't maintained the licenses for the radio stations I used to listen to so I basically gave up using this software for radio.

Also someone stole my mobile phone and I didn't bother to replace it, and my tablet is gathering dust.

And well, android development sucks total shit and I wont do it unless paid anymore.

Unless I get drunk and drag out my small CD collection I just use my amplifier's net-radio to listen to these stations instead:

As of mid-2019 there are 750 downloads of the binaries and 230 of the sources from the old users.on.net/~notzed site, and 144 / 60 on this site - although these are almost certainly just web spiders.

For the source downloads, remember it is GPLv3 so the full source must be made available.

Although it pretty much does all i'm after, if anyone is interested in specific features let me know and i'll think about them next time i have an afternoon to burn. The TODO list below is probably the most likely stuff. Patches are of course will also be considered. I can be contacted via email on gmail or internode using my internode username in the url for this page.

This is the layout on a high-res device. 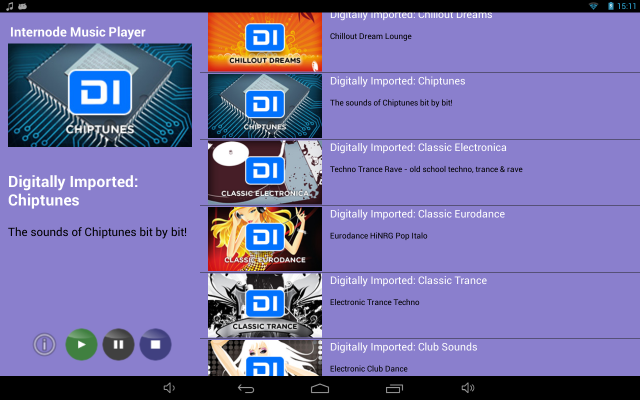 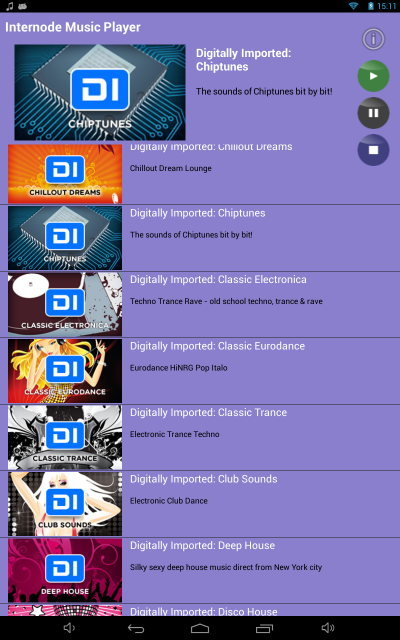 A few ideas in no particular order. I only listen to a couple of stations once in a while so none of these are likely to be implemented any time soon unless I'm really bored and looking for something to do.