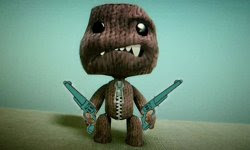 Ahh well, so my `worst fears' about the LittleBigPlanet (LBP) moderation system seem to have come to fruition. I knew when Sony decided to recall all copies because of a possible religious offence only days before a world-wide launch, at no doubt very high cost, we were in for a messy ride if not a complete cluster-fuck.

It seems LBP's moderation system is as harsh as it is limited. From what I can tell, levels get deleted from the server with no explanation for even the slightest infringement - you cannot even play your local copy if you are online, and they retain persistent identifiers so you cannot copy/edit and resubmit them either. There is no ratings system, so everything has to be child-friendly (why does the PS3 have a parental control setting then?), but also it means it has to be inoffensive to everyone - everywhere. Unfortunately, if you look hard enough you can always find someone who will find offence in whatever it is you are doing, no matter how commonplace or inoffensive it may be to you and your associates.

Then there are those nefarious so-called intellectual `property' laws. Trademarked, copyright, or even patented(!) items cannot be represented in the game. So I guess no one-click shopping levels! And these are only compounded by the difficulty in understanding what they actually mean and how they are applied - which might not even be possible if they are trying to comply with some sort of lowest-common-denominator of laws from all countries that have the PSN. For a family-oriented game, almost certainly to be used without supervision of legal counsel, the likely-hood of running afoul of these laws is quite high. And when their home-spun creation vanishes without explanation, I'm sure they'll let all of their friends know of their frustration and anger. Hey maybe they can get Fry in to do some more tutorials - teaching the general populace about the evils of copyright violation!? `Here's the DRM Kid, he'll protect us from those nasty pirates!' (rather ironic if it happened, given his recent piece extolling Free Software for The GNU Project's 25th anniversary).

Ahh, what a mess these laws have created for all of us - even those who wanted them.

But what about the game itself?

I actually bought LBP on Friday and spent a lot of the weekend playing it. I had considered the censorship issue and thought it would probably work itself out. Reading the current threads on the forums does make me feel less of the game, although of course it doesn't change the gameplay of the built-in levels.

It looks gorgeous, with the materials, textures and lighting, sound and effects all spot on (apart from the jump 'whoosh' sound, which I don't particularly care for). The level designs are varied and mostly interesting, and there are constant puzzle elements when trying to advance, or get to bonus items on a level. The controls are over-all pretty good, although since everything is physics based it can take a little getting used to compared to programmed behaviour. The 3 levels of depth is a bit fiddly at times, but it isn't a deal-breaker. It has some frustrations - checkpoints are limited so death can mean the repeat of an entire level. The `emote' functionality (happy/angry/sad/scared) is mostly pointless - usually you're too far away to even see it properly, and it sort of wobbles and flickers a bit when you can - which makes it look a bit silly. It also definitely isn't a young kids game, it is too difficult for that, requiring exact timing and jumping in places - although some of the mini-games are for everyone. Multiplayer can make level traversal more difficult - but that is part of the fun too. e.g. interfering with someone so you get more of the goodies. And each level has at least one 2-player puzzle for extra items. But on many scenes the camera doesn't pan enough, so you can get left behind very quickly - after a short timeout you die until whatever player the camera is on gets to the next checkpoint. I haven't played online.

The user-created levels are a mixed bag - there are so many that it is difficult to find the really good ones. There are too many (utterly pointless and annoying) `get trophies quick' levels high in the list, and people are already asking on forums for levels to be `hearted' for the purpose of gaming the system. So it's mostly just a random guessing game, although with time the tagging system will probably become more accurate and thus useful. Levels load pretty quickly - although i've had some failed loadings, but a retry normally has them work. The polish and difficulty varies greatly, but there is a fairly wild mix, from simple platform games, to races, to puzzle games and so forth - even a side-scrolling shooter with a sort of string-puppet feel to it(!).

The level editor is necessarily quite complicated. But building things out of real materials with motors, switches, connectors and so forth is fairly intuitive - and a heap of fun. It will take a lot of time to create a good level - and with the broken moderation system in place, it reduces the enthusiasm somewhat - it could vanish without explanation if you make a mistake and offend some culture you're not even aware of, for example.

I don't know if the moderation thing will get sorted out. Hopefully it can be toned down a bit - at least it must tell people what they did wrong and give them the opportunity to fix it. There are plenty of people who want to make levels in good faith, but if just one level gets deleted permanently with no explanation or recourse, I can imagine they'll give up on the game forever - and probably be angry enough to let everyone else know too. A tiered system with some more grown-up `may-offend but not-illegal' content would be bloody nice too. e.g. no possibility of art or satire, just `commercial-mainstream that is so inoffensive it manages to offend' type levels - which will end up being boring. A multi-tier system is probably too much to ask, but they clearly need a better system for accidental problems through ignorance - otherwise this game will lose sales.

I suspect it may be a scalability issue - rather than check or edit the levels to fix problems they just blocked the level (or a grief-report blocks the level immediately, until it is reviewed, and they have a back-log). I'm still willing to give them the benefit of the doubt, but I guess time will tell on this one, as it always does.

Copyright (C) 2018 Michael Zucchi, All Rights Reserved.Powered by gcc & me!